CHANDIGARH: Pakistan Prime Minister Imran Khan arrived in Washington on Saturday afternoon on a three-day official trip to the US. Khan, however, is now being trolled for being snubbed by the Trump administration. 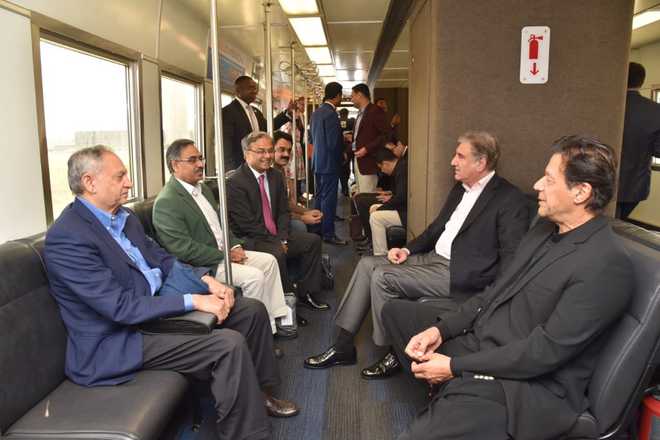 Tribune Web Desk
Chandigarh, July 21
Pakistan Prime Minister Imran Khan arrived in Washington on Saturday afternoon on a three-day official trip to the US.
He was welcomed at the airport by his foreign minister Shah Mehmood Qureshi.
Khan, however, is now being trolled for being snubbed by the Trump administration. Several people on Twitter have claimed that Khan was not recieved by any official of the US adminstration.

Foreign minister receiving his own prime minister in foreign land, is the new protocol for Naya Pakistan. https://t.co/nf3GBxVcsZ

No US official were present to receive PM @ImranKhanPTI at IAD airport. Neither IK recieved any state protocol. pic.twitter.com/WP1rV8XfjG

I know Pakistan didn’t do very well in the World Cup, but this seems a harsh punishment. https://t.co/l16Uo8PQGQ

Wait. Pakistani PM Imran Khan had to take one of those horrible people-movers at Dulles airport??
(no sign of Gen. Bajwa in the arrival video) pic.twitter.com/TGxSLqqj3Z

Don’t feel bad @ImranKhanPTI if no one came to receive you. Our truck is ready to pick you up and drop you at the White House. It can fit your whole delegation too! #EndEnforcedDisappearances #Balochistan pic.twitter.com/eF3pjzcHuI

Khan, 66, is scheduled to meet US President Donald Trump at the White House on Monday during which the American leadership will press him to take “decisive and irreversible” actions against terrorist and militant groups operating from Pakistani soil and facilitate peace talks with the Taliban.
SHARE ARTICLE