Pak to give more land to Kartarpur gurdwara

LAHORE: Pakistan will allot 39 acres more for Gurdwara Darbar Sahib in Kartarpur, up 14 times from the existing 3 acres, Punjab governor announced, while indicating that 80 per cent of the work on the landmark Kartarpur corridor has been completed, according to a media report. 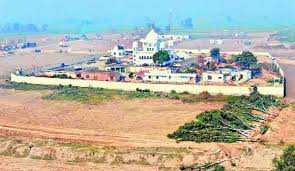 Pakistan will allot 39 acres more for Gurdwara Darbar Sahib in Kartarpur, up 14 times from the existing 3 acres, Punjab governor announced, while indicating that 80 per cent of the work on the landmark Kartarpur corridor has been completed, according to a media report.

Pakistan’s Punjab Governor Chaudhry Muhammad Sarwar on Tuesday announced increasing the land allotted for the gurdwara from three acres to 42 acres and further said that any kind of construction would not be done on the land, which remained under cultivation of Guru Nanak, The News reported.

“We want to convey this message to the Sikh brethren living all over the world that there will be no cut in land for Darbar Sahib, rather 42 acres land has been allocated for the shrine and 62 acres for cultivation,” Sarwar said during his visit to the corridor to review the pace of work on the project.

“In this way, the total land for the gurdwara will be 104 acres,” he said.

The governor, who also heads the committee for religious tourism and heritage, said the total land for the corridor would be 408 acres.

He said 80 per cent of the work had been completed as per vision of Prime Minister Imran Khan and hope that it would be completed before 550th birth anniversary celebrations of Guru Nanak this year. — PTI

Washington: The US has welcomed building of the landmark Kartarpur corridor between India and Pakistan to facilitate visa-free travel of Sikh pilgrims, saying the Trump administration is “incredibly supportive” of anything that increases people-to-people ties between the two neighbours. “That was certainly a good news. We encourage it,” State Department Spokesperson Morgan Ortagus told reporters at a news conference on Tuesday when asked about the corridor. “Anything that increases people-to-people ties between India and Pakistan is something that we’re incredibly supportive of,” she said. PTI

‘Open to dedicating AIIMS to Guru’

New Delhi: Health Minister Harsh Vardhan said on Wednesday that the Centre was open to dedicating the second AIIMS in Punjab to the first Sikh Guru, Guru Nanak, whose 550th birth anniversary celebrations are underway. “We have sought a detailed proposal from the same after Chief Minister Capt Amarinder Singh flagged this demand,” Vardhan said. The CM met Vardhan on Tuesday and raised the demand regarding AIIMS being dedicated to Guru Nanak. The CM has already submitted two separate letters to Health and Finance Ministers to seek Central permission to dedicate the second AIIMS in Punjab to the special occasion – 550th birth anniversary of Guru Nanak. TNS