LOS ANGELES: Peru grabbed a slice of revenge for their loss to Brazil in the Copa America final, defeating the five-time World Cup winners 1-0 in a friendly in Los Angeles. 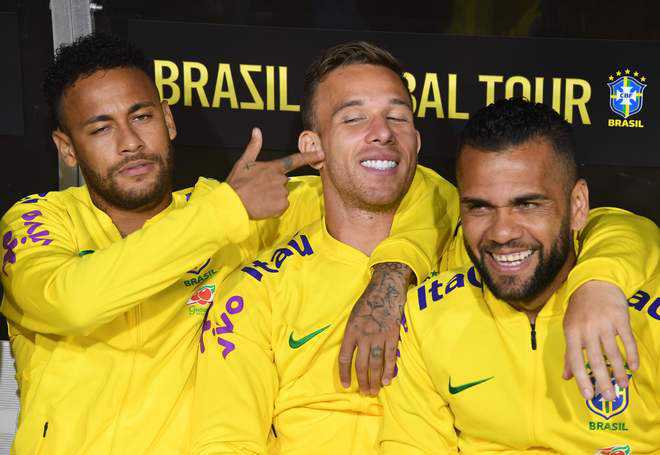 Brazil’s Neymar jokes with teammates before the friendly against Peru in Los Angeles on Tuesday night. AFP

Peru grabbed a slice of revenge for their loss to Brazil in the Copa America final, defeating the five-time World Cup winners 1-0 in a friendly in Los Angeles.

A headed goal from Argentina-based defender Luis Abram was enough to give Peru a hard-fought win over the Brazilians on Tuesday. Brazil, who defeated Peru 3-1 in the final of the Copa America in Rio de Janeiro in July, never got going to the disappointment of a 32,287 crowd at the Los Angeles Memorial Coliseum.

The defeat brought an end to Brazil’s 17-game winning streak, a run which started with a victory over the United States just over a year ago.

Brazil coach Tite meanwhile opted against starting Paris Saint-Germain star Neymar, four days after he had made a successful return from injury with a goal and an assist in a 2-2 draw with Colombia on Friday.

Tite, who had been reluctant to start Neymar in back-to-back games as the striker regains fitness, brought on the PSG forward after 63 minutes in place of Liverpool’s Roberto Firmino. Neymar attempted to up the tempo in attack, but was unable to break the deadlock, with Brazil, who were also missing Dani Alves and Thiago Silva, struggling to find their usual attacking rhythm. Instead it was Peru who grabbed a winner, Abram rising to meet Yoshimar Yotun’s free-kick to glance in the winner. — AFP

Sao Paulo: Police in the Brazilian state of Sao Paulo said on Tuesday they had indicted the woman who accused soccer star Neymar of rape, charging her with fraud, extortion and slander, in what could be a major relief for the Paris Saint Germain striker. The former Brazil captain was accused of raping Najila Trindade in a Paris hotel room in May, but he alleged the encounter was consensual and prosecutors said in August they were dropping the case against him due to a lack of evidence. Sao Paulo state police also said that they were indicting Trindade’s former husband, Estivens Alves, on fraud charges. The BBC reported Trindade’s lawyer as saying the indictment had taken him by surprise and that his client rejected the accusations. The case received worldwide attention and posed sponsorship headaches for Neymar, as well as hurting his international career. The former Barcelona and Santos forward always denied the accusations against him and released private chats and lurid photos he had exchanged with Trindade. Reuters