MANDI: Despite warning issued by the district administration, Kullu, to people to avoid tracking to Shrikhand Mahadev, the popular shrine of Lord Shiva, pilgrims continue to ignore the advisory, putting their lives at risk. 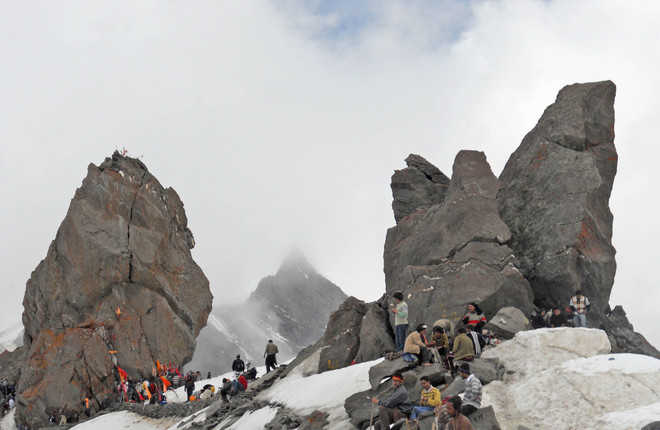 Shrikhand Mahadev is situated at a height of 18,750 feet in Kullu.

Despite warning issued by the district administration, Kullu, to people to avoid tracking to Shrikhand Mahadev, the popular shrine of Lord Shiva, pilgrims continue to ignore the advisory, putting their lives at risk.

One casualty was reported on Tuesday night on the way to Shrikhand Mahadev near Thachru. The deceased was identified as Avinash Bhardwaj (20), a native of Tiyali village under Shimla district.

He had ventured to the area along with his friends but on the way back to Nirmand he fell sick. He could not get medical aid as no medical facility is available in the area and he passed away.

The 35-km long track to Shrikhand Mahadev from Jaon ahead under Nirmand block of Kullu district is very harsh and lacks even basic facilities.

The district administration Kullu had organised official pilgrimage to Shrikhand Mahadev from July 15 to 25. During that period medical and rescue services were provided to the pilgrims for safe pilgrimage. In view of tough terrain and height, people generally suffer from high altitude sickness and breathlessness. Physically unfit people are not allowed to embark for the pilgrimage.

After the 10-day official pilgrimage concluded, the local administration had issued an advisory to the people to avoid journey towards Shrikhand because medical camps and rescue posts had been removed. But there are enthusiasts who pay no heed and venture into the area.

After the death of Avinash, the district administration is planning to put up a warning signboard at entry point of Shrikhand Mahadev track to advise pilgrims against embarking on the arduous journey in view of their safety.

Talking to The Tribune, SDM Anni Chet Singh said, “People are advised to refrain from venturing into the area. The area has been experiencing heavy rain and the temperature has plummeted sharply. The region has also become prone to landslide at several places. There is no shelter or medical facility on the way to Shrikhand Mahadev. Seventytwo feet Shivlingam is situated at the height of 18,750 feet at Shrikhand, where visitors face the risk of high altitude sickness and breathlessness because of the shortage of oxygen at such a high altitude.”

The SDM stated that since 2014, a total of 38 deaths have been reported. These include five deaths reported this year.