Playing ping-pong with the forces

How many terrorists were killed in Balakot — 250 or 300? How many more seats for the BJP in the General Election-30 or 60? Unfortunately, the questions that have come up after the first Indian air strike into the Pakistani territory after 1971 are only political, that too, over possible electoral gains for the ruling party. 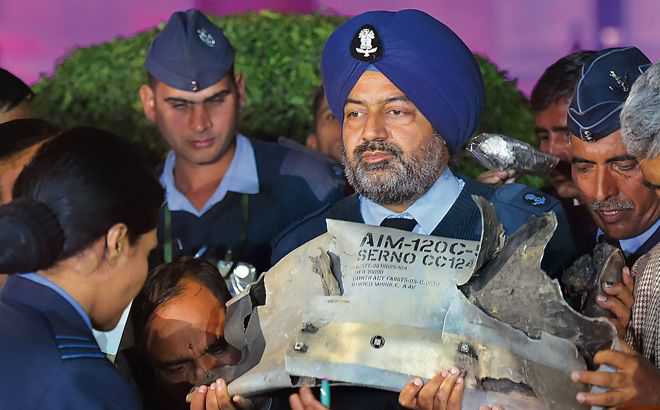 Red line: The BJP should keep the armed forces out of the political crossfire.

How many terrorists were killed in Balakot — 250 or 300? How many more seats for the BJP in the General Election — 30 or 60? Unfortunately, the questions that have come up after the first Indian air strike into the Pakistani territory after 1971 are only political, that too, over possible electoral gains for the ruling party. A minister in the Punjab Government echoed the Pakistani army when he asked whether the Indian Air Force was ‘uprooting trees or terrorists’. Well, the BJP has to be blamed for turning a new Indian doctrine of visible and effective response to a terror attack into a political weapon to subdue its rivals during crucial polls. When the Prime Minister personalised a military success and the ruling party owned it up lock, stock and barrel, the Opposition was left with just one option — to debunk the ruling party’s claims.

Unfortunately, when a military operation is pooh-poohed, the ones who get hit are the men and women who had planned the operation meticulously and executed it to perfection. As a copybook military, which doesn’t meddle in politics or has never allowed the political or communal venom to seep into its soul, the nation owes a great debt to the Indian armed forces. They should be left alone. Sadly, Indian politicians are playing ping-pong with a professional force. The Prime Minister’s play of words on a ‘pilot project’ soon after the Balakot strike and BJP president Amit Shah’s claim of 250 terrorists getting killed there should have been avoided. For an Opposition which was confidently hoping of bringing the government down within two months, the BJP’s appropriation of the aerial strike has brought out the worst instincts within them. It didn’t care for the credibility of the armed forces while seeking proof of the attacks.

The attack on the credibility of the IAF forced Chief of Air Staff BS Dhanoa to say that the Air Force counts only targets, not casualties. As the electioneering hots up, it is only going to get worse. Soon, after every rally where the BJP claims credit for forcing the Pakistanis to ban the terror outfits and to hand over Wg Cdr Abhinandan Varthaman in three days, it will be forcing the Opposition to question all these claims. And there is reason to question these claims. There was probably no basis for the news TV channels to scream about 250-300 terrorists getting killed at Balakot. Once the dust settled, The Tribune reported that the real number could be much less — about 30 — and that the Mirage 2000 jets could have missed the main building.

Yet, the ruling party’s politicisation of the Balakot strike has demolished the Indian media’s credibility, too. In the absence of proper official briefing, the media hung on to every word spelt out by officials tasked to plant stories. This tactic has come back to bite the government, with the Opposition questioning these news reports. Worse, the Indian media has come in for a nasty attack from the international media for being ‘the BJP’s propaganda machine’. Ironically, it is coming from newspapers which had no qualms about inventing Saddam’s weapons of mass destruction, justifying the complete destruction of a fairly progressive country, and had gleefully embedded their reporters with the invading army. After all, these arbiters of the freedom of the press have forgotten how they had refused to report the genocide of 30 lakh people of East Pakistan (going by the Bangladeshi count, which could be nationalistic propaganda) and the displacement of one crore refugees who poured into India in 1971 because it did not suit the US interests of humouring Pakistan, which was brokering a deal with China.

So, if some newspapers like The Tribune did not print the picture of Abhinandan’s bloodied face, it was out of sheer respect for our armed forces and the thorough professionals who run them. And not because the newspaper agrees with anyone’s attempt to own up a hero in captivity. Sadly, the BJP’s attempt to politicise the strike has dampened an otherwise brilliant military move, which is being hailed as a great moment in the history of the IAF. The real questions which the Indian and the international media ought to be asking have all got drowned in dubious claims of the number of terrorists killed. Did an ageing MiG-21 shoot down an F-16? Did the Pakistani establishment use an F-16 against India, violating the contract with the US? Did the Pakistanis send a package of aircraft towards the LoC on February 27 to hit at Indian military assets as a retaliation to Balakot? Why did a certain section of the media term Imran Khan a man of peace after he nearly triggered a full-fledged war with India? After all, the international media is investigating poorly informed Indian journalists and not Lockheed Martin to verify the Indian claim of downing the F-16 or the Pakistanis shooting a US-made AMRAAM missile into an Indian military compound.

Even an honest assessment of the strategic merit of the aerial strike is eluding us as all we have is a partisan attempt to praise or slam the BJP. We may have to wait till the parliamentary polls to examine whether a Kasab strutting around the Victoria Terminus with an automatic rifle in hand is a better memory than a hilltop getting hit by a few Indian missiles. Till then, if the BJP is a truly nationalist party it should keep the armed forces out of the political crossfire, which is only going to get nastier and more feverish. As for the godi media, it too ought to wait for the election results. What if it has to switch masters?