Playing with the big boys 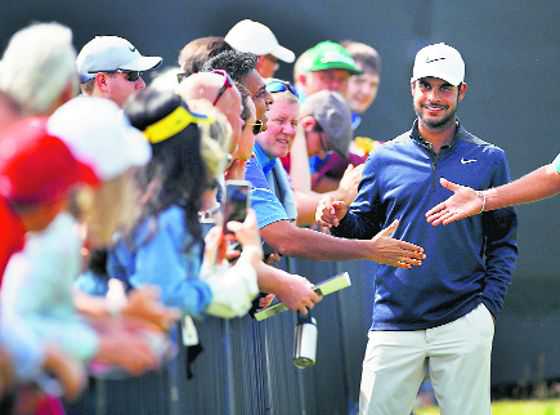 India’s Shubhankar Sharma will tee off alongside world No. 1 American Brooks Koepka and South Africa’s Louis Oosthuzien at the British Open golf tournament here tomorrow. Sharma is playing in his second British Open and only his fifth Major. On the other hand, Koepka won four times in his last nine Major starts, and Oosthuzien won the 2010 British Open at St Andrews.

Sharma got the real taste of Northern Ireland’s wet and windy weather as he went out to practise today. After two glorious days, when Sharma played seven and 18 holes, the Indian, who turns 23 this Sunday, played in typical Irish weather. The conditions are not expected to be benign during the 148th British Open, which returns to Portrush after a  gap of 68 years. “Today was just the kind of weather we can get for much of the week, so we need to play accordingly and make the club and shot selections keeping that in mind,” said Sharma.

In the past 16 months, Sharma has played with some of the biggest names in the world. He has played with Koepka in the past (in 2013 in India), but that was another time and age when the Indian was making his pro debut and Koepka was in the starting years of his pro career.

The 2018 British Open was the only Major where Sharma made the cut, finishing tied-51st. “It will be great to have a nice finish. It will be the best birthday present I can get, just like making the cut on my debut was last year,” said Sharma, who has his coach Jesse Grewal by his side.

Sharma has had an up-and-down season this year, but comes into the British Open with the confidence of a good week at the Scottish Open, where he shot good scores on the last three days and ended tied-34th. “I felt good,” Sharma said. “I played here in different conditions, but in links golf, one cannot make any major strategy. You have to play according to the conditions.”

Sharma’s only top-10 finish this year was second at an Indian tour event. — PTI

‘If home crowds can’t help you, nothing can’

Rory McIlroy said that he is not feeling extra pressure this week as the British Open returns to Northern Ireland for the first time since 1951, and is hoping home fans can help him end a five-year Major drought. The world No. 3 is the bookmakers’ favourite to lift the Claret Jug for the second time on Sunday, despite not having claimed a Major title since the 2014 PGA Championship. “I think it’s probably easier this week because it’s such a big tournament,” said McIlroy, who opens his title tilt alongside US Open winner Gary Woodland and England’s Paul Casey. “You’ve got the best players in the world here, and I don’t feel like I’m the centre of attention. I’m here to enjoy myself. Hopefully it doesn’t take another 68 years for the tournament to come back here. But at the same time, I mightn’t get an opportunity to play an Open Championship here again. I’m going to love being out there and having the crowds and having the support. If that can’t help you, then nothing can.” AFP