Poll maths out of square

Chemistry versus arithmetic is the way Battle 2019 was being seen. 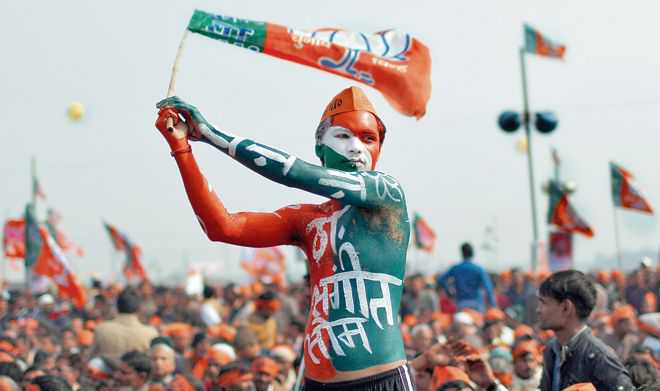 Going strong: Modi’s chemistry has become stronger, with many more buying into his ability to provide a strong leadership, especially after Balakot.

Chemistry versus arithmetic is the way Battle 2019 was being seen. Chemistry was represented by Narendra Modi, who was to be countered by the combined strength of an otherwise scattered Opposition, if not nationally, then at least in half a dozen states. But as things are panning out, it is becoming a case of chemistry plus arithmetic on the BJP side, pitted against an arithmetic which is weakening by the day on the side of the Opposition.

For a couple of years now, it has been clear to the Opposition that it had no option but to come together if it was to have a fighting chance to defeat a Modi-led BJP. And while certain sections of the populace were disaffected or angry, like farmers, Dalits and minorities, Modi himself had not lost goodwill. It was not as if there was widespread anger against the incumbent government, as there was in 2014 against UPA-II. The challenge for the Opposition was therefore greater than might have been the case had there been strong anti-incumbency against the PM.

Knowing that it did not have a  mutually acceptable leader who could take on Modi, arithmetic was of paramount importance to the Opposition, and its leaders talked of effecting one-on-one contests in as many of the 543 Lok Sabha constituencies as possible, the idea being to prevent a division in votes to BJP’s advantage. The 2014 arithmetic had conveyed an unambiguous message. If the BJP had won 282 seats with 31 per cent of the popular vote, a sizeable chunk of the remaining had to come together to defeat it in our ‘first past the post’ system.

In the past month, however, Modi’s chemistry has become stronger, particularly after Balakot, with many more buying into his ability to provide a strong leadership. He lost no time in hyping the ‘nationalism’ rhetoric at every meeting he addressed, making an emotional pitch to win people’s allegiance by appealing to their patriotism. Many who had begun to question some of his actions are now looking at giving him another term, despite the mistakes he has made, like demonetisation, with no clear alternative in sight. Particularly, as the Opposition has not been able to impart a sense of confidence that it will come together.

In addition to the BJP’s ‘chemistry’, the party has also got its arithmetic more in order by fashioning or retaining alliances, sowing discord in the Opposition camp and intensifying dissensions which exist there, using every known, or hitherto unknown, trick in the book, and by getting its micro planning in place.

The elections stretched over several phases in some states — for instance, in UP and Bihar over seven phases —  might have been understandable, but to have a seven-phase election in West Bengal, or four phases in Odisha (with only 21 seats) and Maharashtra, which is not struck by violence, is unusual.

Spanning the election over a longer period is advantage BJP, enabling it to give detailed attention to constituencies in a more planned manner. It has the resources as well as machinery to do it. And now the BJP has urged the Election Commission to declare West Bengal as a ‘sensitive’ state and deploy Central forces in every booth.

As for alliances, it was the mighty BJP which stooped to conquer, leaving 17 seats for the JD (U), of which five were won by BJP last time. This, when the JD(U) had won only two Lok Sabha seats in 2014. The BJP  brought around a difficult and unhappy Shiv Sena, when Uddhav Thackeray had been attacking the PM, even repeating Rahul Gandhi’s ‘chowkidar chor hai’ charge against him. It managed to get the Sena to give up its demand of simultaneous elections in Maharashtra.

In the past months, the BJP’s arithmetic has become stronger. But the Opposition’s will for it is weakening. The Opposition had got a new wind when the SP-BSP joined hands in UP, and the Congress wrested Rajasthan, MP and Chhattisgarh from the BJP in 2018. It was felt that having peaked in states like UP, Bihar, Rajasthan, MP, Chhattisgarh and Gujarat in 2014, and given the belief that Modi, after all, could not better his last performance, the BJP tally was bound to  slump by 80-100 seats. In such a scenario, the Opposition was well placed to drive home its advantage by forging alliances, particularly in the large states.

But for some inexplicable reason, the Congress is out of the SP-BSP-RLD alliance in UP, when they could have really given a BJP a run for its money if all four had joined hands. At the end of the day, a handful of seats either way was not going to lead to a make-or-break situation for any party. If the SP-BSP was to give a few more seats to the Congress in UP, the Congress could have left those many seats for the SP and BSP in the other heartland states, with a consolidation of their vote base, leading to a win-win situation for both.

Sharad Pawar’s decision not to contest from Madha in Maharashtra has weakened him, the NCP and the NCP-Congress alliance in Maharashtra. The Congress’ inability to tie up with the Prakash Ambedkar-Asaduddin Owaisi alliance in the western state will also help the BJP.

Equally inexplicable is the Congress decision not to tie up with the AAP in Delhi, when they share a vote base, which, too, would have firmed up to give a tough fight to the BJP.

The BJP under Modi, having seized the initiative after the airstrikes in Pakistan,  is forging ahead. The Opposition lost steam after the Pulwama attack and has to rethink how to get the narrative back to the issues it had flogged last year to great effect — farmer distress, rampant unemployment, Dalit anger and insecurity among minorities.

The trouble is that opposition parties are still fighting one another, and are not prepared for the reality of an opponent who will go to any extent for victory.