BATALA: Batala city is virtually sitting on a powder keg with residents claiming that the administration is going slow in identifying illegal firecracker manufacturing units and LPG godowns located in densely populated areas. 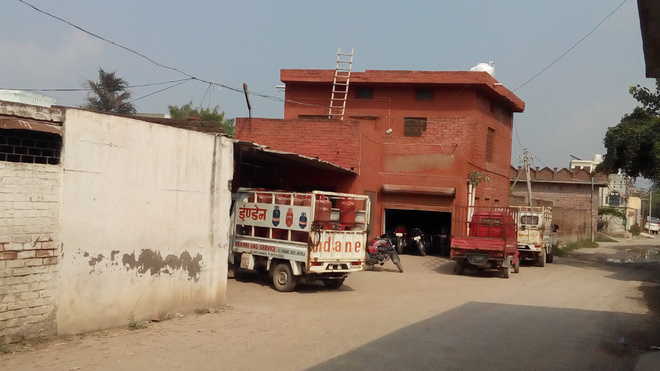 An LPG godown located in a residential area in Batala. The godown is close to a school which has a strength of 5,000 children. Tribune photo

Batala city is virtually sitting on a powder keg with residents claiming that the administration is going slow in identifying illegal firecracker manufacturing units and LPG godowns located in densely populated areas.

Experts say a renowned stockist of firecrackers having his premises under the rail overbridge on the Dera Baba Nanak road has the potential to cause an explosion similar to the one that occurred on September 4.

“He is the cracker king of Batala. He is a man who is politically correct and seldom do the authorities touch him,” said an official.

Countering the claim, SAD MLA Lakhbir Singh Lodhinangal said he had pointed out the units violating norms to the DC a few days ago but no action had been taken.

“The administration is taking too long to identify and close such factories. These units are using chemicals which are highly sensitive to friction, impact, heat and static electricity,” said Rajpal Singh, who lives near the blast site. Harinder Singh, a former councillor, said a repeat of the September 4 tragedy was waiting to happen with officials showing laxity.

An LPG godown located near RD Khosla school, having a strength of 5,000 children, is also being viewed with suspicion by residents.

“Kalgidhar colony, which is a highly populated area, is located right next to the godown. When will the administration act is anybody’s guess, but I have started efforts to ensure the godown is shifted to a safer place,” said former MLA Ashwani Sekhri.

However, the owners of such units say that when they constructed the godowns, there were no houses or other establishments nearby. “We have all permissions, including the ones pertaining to storing explosives, with us,” said an owner.