''1984 Sikh Genocide Memorial'' in US removed after India protests

NORWICH (CONNECTICUT): About three months after a ''1984 Sikh Genocide Memorial to the Sikhs victims of the 1984 riots in India was installed at Otis Library here, the memorial was removed in the part following request from the Indian government. 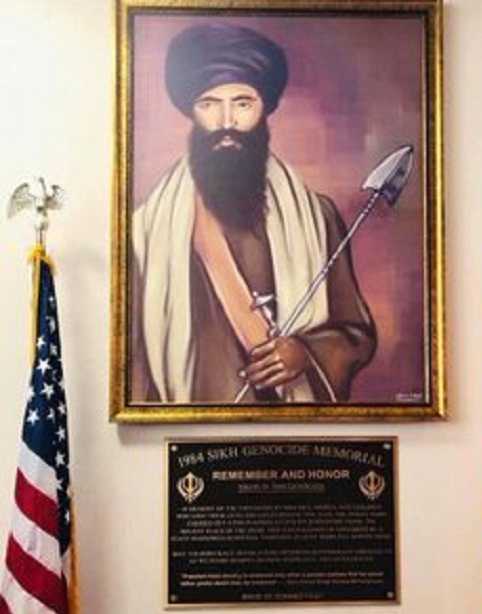 About three months after a '1984 Sikh Genocide Memorial to the Sikhs victims of the 1984 riots in India was installed at Otis Library here, the memorial was removed in the part following request from the Indian government.

The memorial, that featured a prominent photo of Khalistani leader Jarnail Singh Bhindranwale, accused the Indian government of genocide.

"Otis Library and the Norwich Monuments Committee jointly agreed to remove the plaque, flags and portrait," Nicholas Fortson, president of the library Board of Trustees, told the Norwich bulletin.

It was removed about two weeks ago, he said.

Swaranjit Singh Khalsa, the city's Sikh community leader and a local business owner, donated the memorial and lobbied to have it put up.

He said he opposes the library trustees' decision. "It's not Indian-held territory," Khalsa said. "The (Sikh) community was very upset," he claimed.

"They just decided this was not good for the mission of the library," Gould said.

After the memorial was unveiled in June, the library received "harsh criticism as well as support," Fortson said.

Among the critics was the Indian government.

An official from the consulate in New York telephoned Otis Library Executive Director Bob Farwell about the memorial, Fortson said.

A call to the Indian Consulate in New York seeking a comment was not returned, the newspaper said.

The memorial upset some local Hindus, Gould said. "The library doesn't want to get involved in some controversy."

"The library is a non-political organization," Fortson said, and neither endorses products nor partisan political causes. "We want to make sure our visitors are in a safe atmosphere."

The "1984 Sikh Genocide Memorial" was placed on a wall of the library's main lobby. An unveiling ceremony was held in June, with many Sikhs present as well as several city officials and community leaders.

The memorial was the only one of its kind in the United States.

"As a community space, we welcomed the opportunity and encourage the public to view the memorial and learn more about the Sikh community and its history," Farwell told a Bulletin reporter in advance of the unveiling. "We are a venue that attracts a diverse body of patrons, which certainly helps broaden public awareness."

On September 16, the library received the Norwich Rotary Community Diversity Award. The award presentation said it was given partly because of the Sikh memorial.

The Sikh memorial featured flags and a plaque honoring Sikh soldiers who fought to protect places of worship beneath a portrait of Bhindranwale, who was killed during Operation Bluestar—the army operation to flush out separatist Khalistani militants from the Golden Temple, in Amritsar, Punjab.

The temple fight later led to the assassination of Prime Minister Indira Gandhi by her Sikh bodyguards. Her death sparked riots in November 1984 in which around 3,000 Sikhs were killed in riots, mainly in the Indian capital.

The US government, although saying that "grave human rights violations" occurred, has always refused to term the killings genocide, the paper said.

The plaque, however, called the November killings "a state sponsored genocidal campaign against Sikhs all across India."

According to Khalsa, the memorial was a rare chance to present the "Sikh narrative" of what happened in 1984, which he said the Indian government has tried to suppress ever since.

The plaque, flags and portrait have been returned to Khalsa. He said the memorial could be moved to City Hall instead.

"I still hope we will be able to resolve it," he said.

He is planning an event on November 9 outside City Hall. "We should still continue with our narrative," Khalsa said.

According to Religion News, the India's consul general in New York had written to Connecticut state Sen. Cathy Osten, who requested that Sikh Genocide Remembrance Day be included in a bill designating commemorative days. In the letter, the Indian official said that Sikhs do not face persecution in India and referred to Khalsa and other local Sikhs' efforts as "vociferous, pernicious and divisive."

Connecticut has a small Sikh community—five gurdwaras and around 400 families. However, thanks to Khalsa's efforts last year, Connecticut became the first US state to recognize the 1984 anti-Sikh riots as a genocide when it passed Senate Bill 489 to name November 30 Sikh Genocide Remembrance Day.

The state has also designated June 1 as Sikh Memorial Day and April 14 as National Sikh Day. Khalsa, who received awards from the FBI for his work coordinating the area's many Sikh awareness campaigns and political engagement initiatives, was also involved in the city of Norwich's recognition of November as Sikh American Awareness and Appreciation Month, says Religion News. — IANS