DAKHA: Over 39 per cent polling was recorded in Dakha Assembly constituency of Punjab till 1 pm on Monday. Polling will continue till 6 pm. 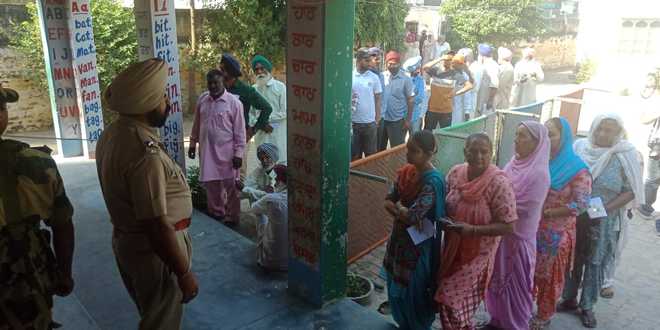 Dakha Assembly constituency of Punjab recorded 50.80 per cent polling till 3 pm on Monday. Polling will continue till 6 pm.

Heated arguments between Congress and Akali workers have been reported in some villages including Mandiani and Gorsian Kadar Baksh.

Congress workers allegedly ‘manhandled’ the grandson of a former Akali sarpanch of Mandiani village outside the polling booth. Gurmukh Singh, kin of the youth, said Congress workers hurled abuses at the Akali worker.

A large number of political leaders from outside the constituency were present in area, as per sources. Some Congress leaders from Ludhiana were spotted at Mullanpur-Dakha town.

There are 220 polling stations in Dakha assembly constituency, and there are 1,84,306 general voters along with 780 service voters in the area.

According to the district election officer, 1295 officials of the civil administration have been deputed along with security personnel.

DC Pradeep Kumar Agrawal said that the polling process has remained peaceful till now. There were complaints about a snag in two to three EVMs but required measures were immediately taken, he said.

Harpreet Sandhu alleged that Ayali appeared live on Facebook and asked people to press the button of SAD’s election symbol on Monday morning.

Following the complaint, Returning Officer Amarinder Singh Malhi wrote to the DSP to take required legal action on this complaint.