CHANDIGARH:The state government has decided to close down 800 government primary schools having less than 20 students. 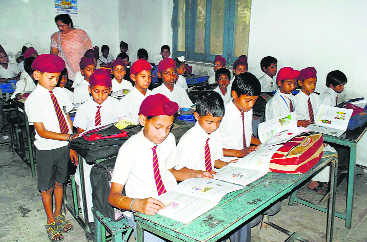 The state government has decided to close down 800 government primary schools having less than 20 students. These schools will be merged with nearby schools located within a radius of 1 km.

In a press release, calling it “a novel plan aimed at ensuring conducive academic environment”, the government said the Right of Children to Free and Compulsory Education was being fully adhered to and no student would traverse a distance of more than 1 km from his or her residence to go to school.

The spokesperson added that many schools being merged were situated right next to the other schools and at many places both schools share a wall. The exercise will be completed by November 30.

The government said the decision of merging schools was part of series of educational reforms ushered in the state. The spokesperson said the schools which were situated at a distance of more than 1 km would not be merged even if the strength of the students was less than 20.

Among the 800 schools, the maximum are located in Hoshiarpur and Gurdaspur. Muktsar, Mansa, Bathinda, Barnala and Faridkot will be least affected as less than five schools each will be closed down in these districts.

The spokesperson added that 47 of the schools facing merger have student strength of less than five and out of these, 15 schools have even less than three students.

The decision will affect a total of 1,168 teachers in 22 districts of the state. The government said these teachers would be deployed at the places where their services were needed the most. It also said teachers of the schools being merged would be deputed in the district concerned at needy schools having vacant slots as per their seniority on an impartial basis.

Thumbs down from Opposition parties

Chandigarh: Opposition parties have condemned the government’s move to shut 800 primary schools. Leader of the Opposition Sukhpal Singh Khaira said AAP would hold a protest outside the premises of these schools. He urged Chief Minister Capt Amarinder Singh to direct the Education Minister to withdraw the notification and motivate people to increase the number of students in schools to fully avail the central grant. The SAD core committee also flayed the move. Former Education Minister Daljit Singh Cheema said: “The merger in the name of rationalisation should be done after discussing individual cases with the panchayats. This decision will hit people hard in the Kandi area (Hoshiarpur, Gurdaspur and Ropar), and we could witness a rise in the dropout rate. It’s not a wise move, especially when the government wants to start pre-nursery schools.” TNS