CHANDIGARH: Acting on a petition filed by the Income-Tax Department challenging a Ludhiana court order remanding back its complaint against Chief Minister Capt Amarinder Singh to the trial court for fresh order, the Punjab and Haryana High Court today put him and his son Raninder Singh on notice. 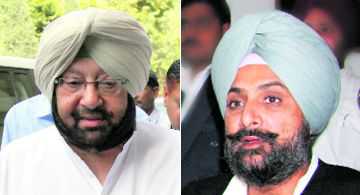 Acting on a petition filed by the Income-Tax Department challenging a Ludhiana court order remanding back its complaint against Chief Minister Capt Amarinder Singh to the trial court for fresh order, the Punjab and Haryana High Court today put him and his son Raninder Singh on notice.

The department through senior counsel Chetan Mittal submitted that information in the form of master sheets was received on July 22, 2011, by the Director-General of Income Tax (Investigation), “thereby indicating association/connection of the family members of the accused with certain foreign entities”.

He added information in the shape of master sheets was originally received on June 28, 2011, in Paris by the Foreign Taxes and Tax Research Division of Central Board of Direct Taxes officially from the competent French authority. It was in the shape of USB pen drive.

The documents, it was added, indicated that Raninder Singh had association with foreign trust, certain foreign business entities and banks. The process of inquiries was “put into place” by the competent authority of the department against Raninder Singh and other close relation and family.

“On perusal of the documents in possession, it was clearly established that Amarinder Singh, respondent/accused, is aware of these foreign assets/transactions and is party to the same. Consequently, summons was issued to seek documents pertaining to Jacaranda Trust and other foreign entities/assets...,” it was added.

The Bench was told that the trial court, after hearing the counsel for department, passed summoning order on April 24, 2017, against the respondent to face trial.

The respondent, in turn, filed revision petition before Ludhiana Additional Sessions Judge against the summoning orders. The court remanded the case back to trial court with a direction to pass the fresh order”.

Challenging the order, Mittal told Justice Rajbir Sehrawat’s Bench that documents taken from pen drive supplied by the government of France could not be discarded on the ground that it was not accompanied by a proper certificate. Justice Sehrawat fixed April 25 as the next date of hearing.