HC stays recovery of penalty on farmers for violating ban

CHANDIGARH: Taking up the smoldering issue of stubble-burning, the Punjab and Haryana High Court today stayed the recovery of fine imposed on farmers for violating the ban. 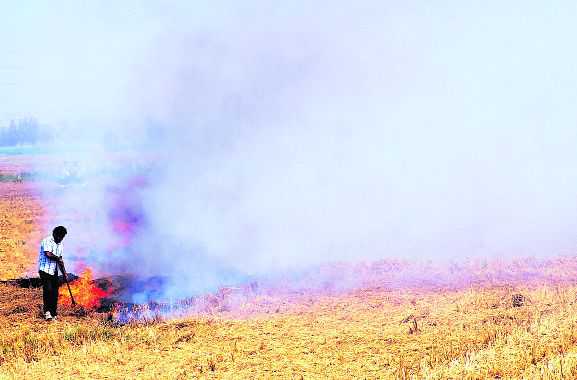 Taking up the smoldering issue of stubble-burning, the Punjab and Haryana High Court today stayed the recovery of fine imposed on farmers for violating the ban. Justice Rajiv Narain Raina also issued notice before directing the secretaries of both Punjab and Haryana to discuss the issue with different instrumentalities of the state to come out with a solution.

Justice Raina also issued notice to the agriculture universities of both states to come out with a solution. The Union Health Secretary was put on notice before being asked to file an affidavit on steps initiated by the Central Government to douse the problem.

Justice Raina also made it clear that only the recovery of fine under environment compensation had been stayed. But the state may continue with punitive action. Justice Raina, at the same time, observed in the open court that stubble could be stored at shamlat or forest land, instead of being set on fire. The case will now be treated as petition in public interest.

The directions came on a petition filed by Bharti Kissan Union counsel Charanpal Singh Bagri. As the case came up for resumed hearing, Bagri told the Bench that people having multiple vehicles were continuously polluting the environment, while the farmers were being targeted for an activity that did not last for more than 10 to 15 days.

Bagri had earlier sought issuance of directions to the respondents to pay adequate per-acre compensation to the farmers, as orders by the state government had restrained them from burning paddy straw, stubble and residue.

Bagri had added that the farmers burning paddy straw were fined from Rs 2,500 to Rs 15,000. Criminal action was also initiated. Besides, red entry was made in the revenue record. The state policy was, as such, resulting in oppression of the farmers and discouraging them from paddy cultivation. Bagri had submitted paddy straw remained in the field and decayed if it was not burnt.