FAZILKA: Shiromani Akali Dal (SAD) president Sukhbir Singh Badal, while campaigning in Jalalabad in favour of party candidate Raj Singh Dibbipura, today claimed that the state continued to slip on all parameters under the Congress regime. 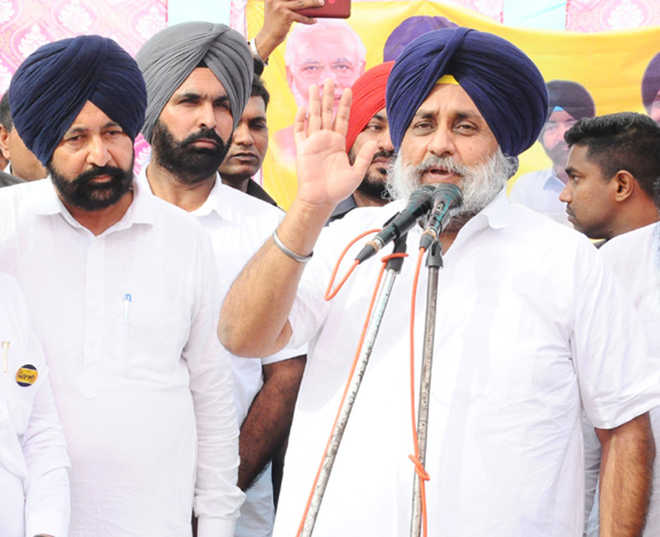 Shiromani Akali Dal (SAD) president Sukhbir Singh Badal, while campaigning in Jalalabad in favour of party candidate Raj Singh Dibbipura, today claimed that the state continued to slip on all parameters under the Congress regime.

“It has slipped to the 20th position in ease of doing business in the World Bank ratings and to 11th position in Niti Aayog’s Innovation Index 2019. There is no governance in the state. Lawlessness has increased. So has corruption and red-tapism,” he alleged.

Alleging that there was no hope for Punjab under Capt Amarinder Singh, the SAD president said, “Captain lives in his own world. He is inaccessible even to ministers. One can guess how the common man is treated?”

He urged the people not to get befooled by false promises of Congress candidate Raminder Singh Awla of setting up factories in this segment.

Sukhbir also highlighted how Jalalabad had witnessed a phenomenal growth during the SAD-BJP government. More than Rs 350 crore was spent on waterworks alone, he claimed. “In contrast, not a single brick was laid in Jalalabad after the Congress government took over the reins of the state. Development work has been stopped and money released to villages was withdrawn,” he alleged.

Earlier, Sukhbir said the Congress government did not have one achievement to list even after two-and-a-half years in governance. He said all sections of society were being discriminated against, with the farmers, khet mazdoor, youth and Dalits being the worst-hit.

Chandigarh: PPCC chief Sunil Jakhar asked Sukhbir to clarify stand on the statement of RSS chief Mohan Bhagwat that India was a ‘Hindu rashtra’. Reacting to Takht Jathedar's demand to ban the RSS, Jakhar said the Jathedar had shown the courage to speak the truth, but the Akalis due to political compulsion were not able to do so, he said. TNS