CHANDIGARH: With crop residue burning causing air pollution, the farmers’ outfit Bhartiya Kisan Union (Ugrahan) on Thursday said they have no option except burning it unless financial incentive is offered. 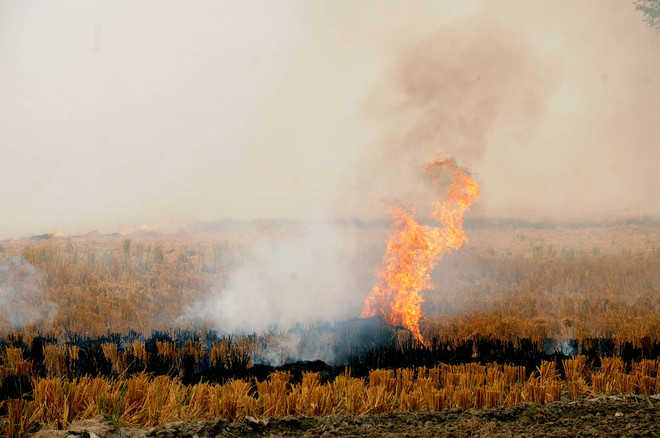 A file photo of paddy stubble burning in a field.

With crop residue burning causing air pollution, the farmers’ outfit Bhartiya Kisan Union (Ugrahan) on Thursday said they have no option except burning it unless financial incentive is offered.

The farmers sought Rs 200 per quintal as bonus or financial assistance as per the National Green Tribunal’s (NGT) 2015 order for stopping stubble burning, it said.

Despite ban, several farmers in Punjab and Haryana continue to burn paddy stubble immediately after crop harvesting in order to sow winter crop.

The crop burning is leading to heavy pollution in the air and causing breathing problems among people.

As per estimates, nearly 20 million tonne of paddy straw is burnt in Punjab every year, which becomes a major reason for pollution.

“We do not have any option except burning paddy stubble unless financial incentive is offered. The Punjab Government should help farmers by giving Rs 200 per quintal or provide financial assistance on machinery, as per the NGT order, for the disposal of straw,” BKU (Ugrahan) president Joginder Singh and general secretary Sukhdev Singh Khokrikalan said in a joint statement here.

The statement came a day after the NGT had directed the Punjab Government to produce before it 21 farmers which it claimed to have helped by giving incentives and infrastructural facilities to prevent them from burning crop residue in a bid to check air pollution.

“Farmers who are already debt-ridden are unable to bear the expenditure of Rs 5,000 to 6,000 per acre as expenditure on disposing of residue through environment-friendly measures,” they said.

They also condemned the government’s action being taken against farmers who burn paddy stubble.

“Rather than penalising the farmers, the state government should come out with providing financial assistance for farmers,” they said.