Patiala GMC tells students not to party at night

PATIALA: At a time when demand for students’ freedom on college campuses across India is on the rise, Government Medical College (GMC) here has issued a diktat of not to roam around and party on the college campus at night to the medicos. 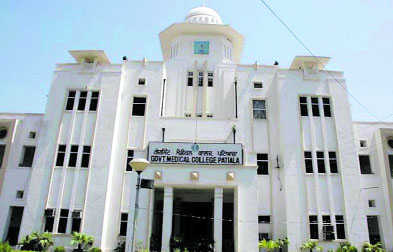 A file photo of Government Medical College in Patiala.

At a time when demand for students’ freedom on college campuses across India is on the rise, Government Medical College (GMC) here has issued a diktat of not to roam around and party on the college campus at night to the medicos.

Describing roaming and partying on the campus at night as violation of the college discipline, the authorities have already warned medical students and junior residents (JRs) through a circular to be ready for disciplinary action if caught violating the order.

The GMC principal has already formed a panel to implement the order. The principal has asked it to conduct surprise checking at night with the help of security and police personnel deputed at the hospital.

However, JRs and medical students have strongly condemned the diktat. They said it was not for the first time that such instruction was issued by the college. A few years ago, girls were asked to wear suit and salwar during classes by the principal, they added. Doctors argued that they had night duties at the hospital and prepare for postgraduate tests. The circular issued in the name of discipline was arbitrary and showed conservative approach of the authorities, doctors added.

A final-year MBBS student said, “How does roaming in the night on campus create indiscipline. We come late from night duty and even if we hang out in the college what is the issue? Ours is not a surveillance state.”

Sources said there had been incidents of violence on the campus, which prompted the authorities to take precautionary measures. Last month, a few doctors ended up in a scuffle with old students during a midnight birthday party.

“Security is not sufficient for round-the-clock supervision of hostels. There have been instances of irresponsible activities in hostels,” said DS Bhullar, a member of the discipline committee. “If authorities are apprehensive of indiscipline or violence, they should increase security instead of curbing our freedom,” said doctors.

“The committee has been formed just to check indiscipline in the college and avoid any untoward incident. The move is just a precautionary measure to stop bad activities inside the college,” said Dr KK Aggarwal, Principal.