JALANDHAR: About seven persons attacked a property dealer and his son with sharp-edged weapons in his shop beside the bus stand here on Tuesday. 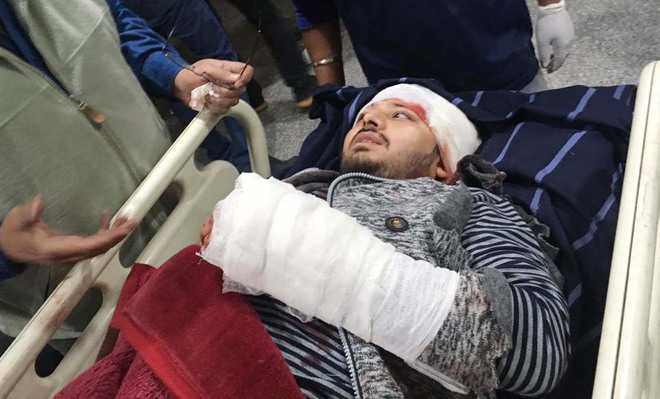 Sunny Sharma under treatment at a hospital in Jalandhar on Tuesday. Photo: Sarabjit Singh

About seven persons attacked a property dealer and his son with sharp-edged weapons in his shop beside the bus stand here on Tuesday. The attack took place about 200 metres from a police post.

The victims, Shashi Sharma and his son Sunny Sharma, are members of a Hindu outfit. They also run a legal service centre and a travel company in the city.

The assailants tried to tamper with the CCTV cameras installed inside and outside the shop before escaping. Shashi sustained injuries on the forehead, chest and feet, while his son had bruises on the arms.

Shashi’s gunman was overpowered by the assailants, who also snatched his weapon. However, he recovered it later.

The police said Shashi had got settled a property dispute in his office in the morning with Ludhiana-based persons. He had allegedly forced them to strike a compromise. Later, some persons returned, argued with Shashi and attacked him and his son.

“They were carrying firearms, but did not use them,” said Deputy Commissioner of Police (investigation) Gurmeet Singh. He added: “Claiming that his life was in danger, Shashi had sought security from us about 10 months ago.”

The police did not share CCTV footage with the media. The doctors attending to the victims said both were out of danger. Division Number 6 SHO Onkar Brar said, “We will record the statements of the victims and then register a case of attempt to murder.”