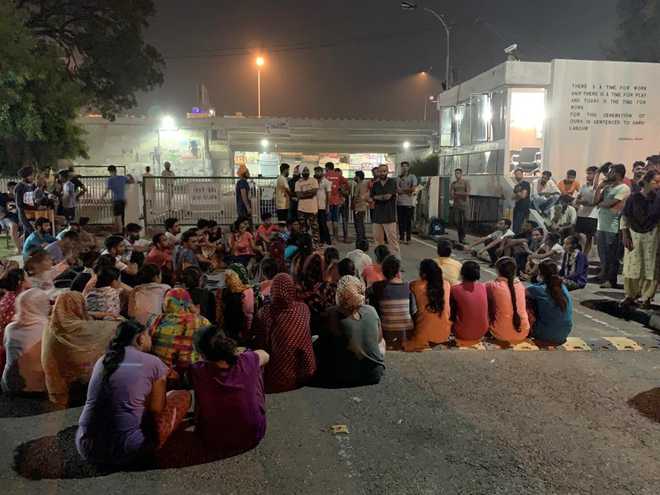 With the university security allegedly failing to identify the culprits, who made good their escape, hundreds of students held a night-long protest against the varsity authorities for failing to curb such incidents.

Following the assurance, students ended the protest at around 5 am on Monday. Following a complaint, police registered a case against unidentified persons under Section 354, 323, 506, 148, 149 and 341 of the IPC.

According to the victim, a group of seven students from Theatre & Television and Dance Departments, including two boys, were on their way to the hostel at around 10 pm when three bike-borne miscreants allegedly eve-teased the girls on the campus.

One of the male students reportedly entered into an argument with the accused near Homi Baba Hostel, and minor scuffle broke out between both the groups. The scuffle ended somehow and the eve-teasers left. After few minutes, they returned along with half-a-dozen other boys to settle score with the three boys who were accompanying the girls.

The accused thrashed the boys near UFC food point near girls hostel. In the incident, a boy of the theatre department received head injuries while a girl of the same department received minor bruises on her hand. The injured boys were rushed to Government Rajindra Hospital.

The victims said the majority of the accused were allegedly drunk and passed offensive and lewd remarks, when the girls opposed eve-teasing. One of the girls, who had received injuries, said, “The accused wrenched my hand when I tried to stop them from beating our classmates. They pushed me when I intervened.”

She added if the university authorities didn’t take strict action against the accused in the next 24 hours, they will block the main gate of the university on Wednesday morning.

“When we approached the hostel security guards, they refused to entertain our repeated pleas,” they claimed.

Professor Tara Singh, Dean Students Welfare, said one of the accused had already been identified through CCTV footage at the main gate. “The main accused is an outsider. We have already referred the case to the police. We will make more efforts to tighten the security to avoid such incidents.”

Meanwhile, Gurtej Singh, security in-charge, said, “We are investigating the case from all angles. We have retrieved CCTV footage. It will be too early to say wheather all the accused were university students or outsiders.”

Condemning the incident, former Panjab University president Kanupriya, said, “It is time and again that these institutes of higher education protect the oppressor instead of the victim. Roots of such shameful incidents are the discriminatory hostel timing by the authorities which let one exploits the other.”

Last week, an outsider allegedly committed suicide in the university hostel. While the incident was highlighted in the media, the university officials are yet to fix responsibility of their officials who allowed the boy inside the hostel room “without permission”.