JAIPUR: MP Sunny Deol and Actress Karishma Kapoor have filed a ''review petition'' in a local court, challenging the Railway Court''s action on a case of alleged ''chain pulling'' incident in 1997. 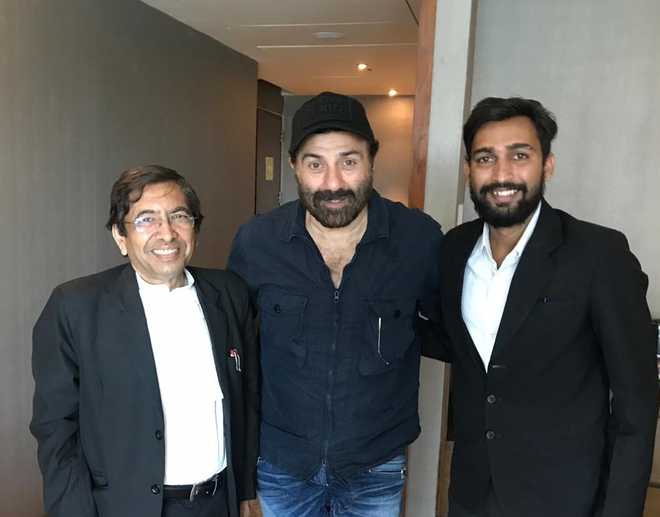 Actor-turned-politician Sunny Deol with his lawyers at a hotel in Jaipur. — Tribune photo.

Actor-turned-politician Sunny Deol and Bollywood actress Karishma Kapoor have filed a 'review petition' in a District and Session Judge court here on Thursday. The actors challenged the Railway Court's action on a case of alleged 'chain pulling' incident during the shooting of 'Bajrang', between Phulera and Narena railway stations in 1997—about 22 years ago.

"On behalf of Deol and Kapoor the review petition was filed in the District and Session Court Justice S K Jain, on Wednesday, and it has challenged the Railway order of Railway court (order date September 17, 2019 ", their lawyer A K Jain told The Tribune.

The charges were filed by ACMM Court-Railway in Jaipur, Mahanagar. They have summoned three witnesses on bailable warrant for the next hearing on September 24.

"It was a coincidence that Sunny was in the Pink City to promote his son Karan's film: 'Pal Pal Dil Ke Pass’, and not for this case nor the Court has asked the actor to be here. Karisham was not in Jaipur", Jain who met the actor at a hotel here clarified.

Deol and Kapoor along with stuntman Tinu Verma and Satish Shah were accused of allegedly and illegally entering Narena station at Phulera in Ajmer division. They were charged of allegedly pulling the chain of train 2413-A Uplink Express causing delay by 25 minutes, according to the court proceedings.

The then assistant station master of Narena station, Sitaram Malakar, had filed a written complaint at General Railway Police alleging that a few people working in movies at Sanvarda village, who came from Mumbai, had pulled up the chain of the Uplink Express at Narena station.

The film was shot at Sanvarda village near Phulera.

The actors are accused of violating Section 141 (needlessly interfering with the means of communication in a train), Section 145 (drunkenness or nuisance), Section 146 (obstructing a railway servant in his duties), and Section 147 (trespass and refusal to desist from trespass) of the Railways Act.

The District and Session Court will decide the fate of the 'review petition' on Thursday.