With SAD-BJP leaders in tow, Dhindsa starts campaign in Sangrur

SANGRUR: The SAD-BJP candidate from Sangrur, Parminder Dhindsa, started his election campaign on Monday. He was welcomed at various points by SAD-BJP leaders. 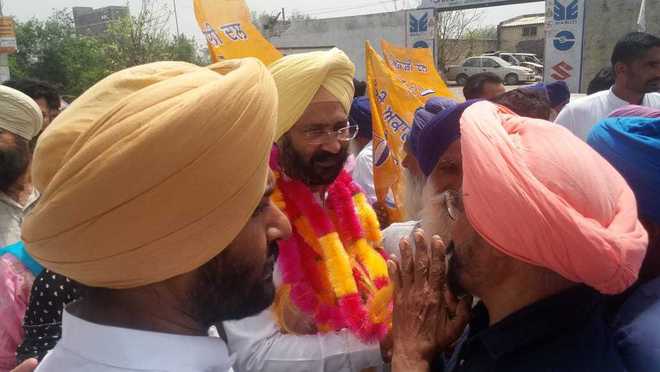 Parminder Dhindsa during his election campaign in Sangrur. Tribune photo

The SAD-BJP candidate from Sangrur, Parminder Dhindsa started his election campaign on Monday. He entered the district from Channo and was welcomed at various points by SAD-BJP leaders.

Addressing a gathering here, Dhindsa said, “Punjab residents are fed up with the misrule of the Congress in the state and would vote for the SAD-BJP candidates in the general election. We will fight election on the development issue, brought by our government in 10 years of its recent rule.”

Dhindsa was initially reluctant to contest following the advice of father and Rajya Sabha MP Sukhdev Singh Dhindsa. But after the party announced his ticket on April 5, his father gave him his blessings.

It is the first election when Dhindsa senior is missing from the SAD party campaign. This time, Parminder has to lead his campaign as his father has expressed his inability to campaign due to health reasons.

District BJP president Bikram Pali said, “All BJP leaders will work hard to ensure Dhindsa’s victory as he has brought development to Sangrur and Barnala districts when he was the minister.”

Local leaders organised functions at various places, including Channo, Bhawanigarh and Sangrur, to welcome Dhindsa and announced their support.

Addressing a gathering, Dhindsa said, “The AAP has cheated Punjab residents and all its leaders stand exposed. Bhagwant Mann has failed to bring in any development to Sangrur.”