SHILLONG: Residents of the Punjabi Lane here have been given 30 more days time to produce valid documents to prove that they have been staying in the area legally, Deputy Chief Minister Prestone Tynsong said on Thursday. 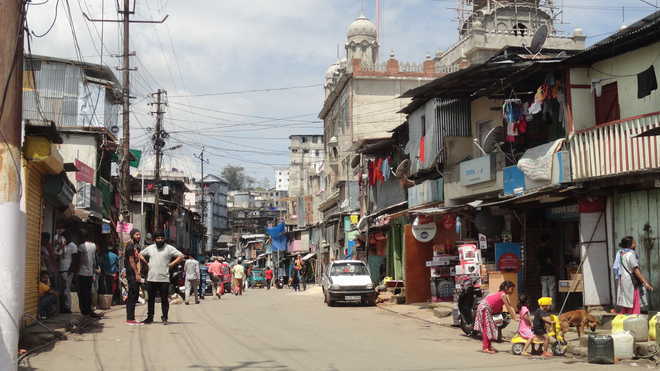 Shillong''s Punjabi Lane area that has been inhabited by people from Punjab. — File photo

Residents of the Punjabi Lane here have been given 30 more days time to produce valid documents to prove that they have been staying in the area legally, Deputy Chief Minister Prestone Tynsong said on Thursday.

Punjabi Lane is inhabited by people from Punjab, who were brought to Shillong around 200 years ago by the British to work as cleaners and sweepers. An incident of assault in the area in May last year had resulted in group clashes following which it was put under curfew for over a month.

There was a demand from various quarters to relocate the Punjabis from the area since it is not a residential area and the living conditions of the settlers are slum-like.

Tynsong, who chaired a high-level committee meeting on Thursday, said the government has again given another 30 days extension from the day fresh notice is served to the settlers to provide valid documents.

The Shillong Municipal Board (SMB) had served notices to the settlers of the area on June 1 giving them one months period, but till July 2, no one complied, Tynsong said.

“Till Wednesday, no one turned up for producing the documents. According to the direction of the high court, we decided to once again extend the period for another 30 days from the day the notice is served. The Shillong Municipal Board is to serve fresh notices,” he said.

“They (settlers) claimed to have settled there for 200 years. I do not think they will have any problem to produce the documents proving their claims,” he said.

A division bench of the Meghalaya High Court headed by Chief Justice Ajay Kumar Mittal had on June 28 last directed the residents to furnish requisite information to the state government.

The deputy chief minister said the direction of the court is very clear that the residents of the locality have to cooperate with the inventorisation made by the SMB.

The SMB will also serve notice to the chairman of the Harijan Panchayat Committee, their legal counsel and to all 300 settlers in the area.

According to the high-level committee chairman, the exercise is to identify who are the legal settlers and who are illegally living in the area.

Meghalaya has a stringent Land Transfer Act in place in which people other than the indigenous tribals can claim ownership over any land within the state except in areas known as European Wards (Revenue Land).

The Them Iew Mawlong area, where the legal tussle is on, is not part of the European Ward.

The objective of inventorisation exercise by the SMB is to find out the number of persons residing there including their duration of stay to allow the government to prepare both long term and short term policy for resolving the issues of the Punjabis settling there.

In a report to the high-level committee, the SMB had earlier identified 184 as employees of various government agencies settling in the area legally. These include families of 128 employees of the SMB and 56 others who are working in the different government departments. — PTI