Currently, Kiran Cinema is running a movie, Total Dhamaal, four times a day. At the 3 pm show, the audience, occupying only about 20 seats out of the total 500, cracks up as Johnny Lever graces the screen. 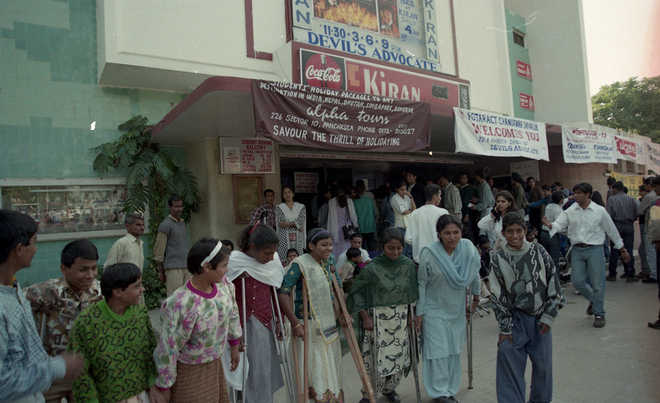 A 1998 picture shows Kiran Cinema buzzing with activity; and (below) it wears a deserted look today.

Currently, Kiran Cinema is running a movie, Total Dhamaal, four times a day. At the 3 pm show, the audience, occupying only about 20 seats out of the total 500, cracks up as Johnny Lever graces the screen.

Lever’s antics and the reaction they draw are perhaps one of the few things which haven’t changed at single-screen theatres over the years — theatres which also share his outdatedness. Once a permanent fixture in all big films, he now finds himself in slapstick comedies, ironically considered more suitable for the demographic visiting single-screen theatres in today’s age.

In the Chandigarh Master Plan for 2031, notified in 2015, a heritage status was proudly recommended for Kiran, especially for its “imaginative design”. This should be done in consultation with the owners of the theatre and by following “the best practices in the world” to preserve heritage sites, announced the plan.

Kiran Cinema in Sector 22 is now a heritage property. It doesn’t however have much else. A crumbling and dirty building, it seems like it no longer captures anyone’s attention. The owners visit once in a few years. The Administration is not quite sure of what to do with it. There are only but a few admirers of its “imaginative design”.

Work to build the theatre had begun in the early 1950s, which makes the theatre almost as old as Chandigarh itself. It was the city’s first theatre, Maxwell Fry was its architect, and its architectural style is Modernist.

“Kiran Theatre was born out of the oldest sector of the city, Sector 22. The sector was the heart of the city, in fact the city itself at that time,” says Prof Sangeeta Bagga, Principal, Chandigarh College of Architecture.

Over the years, Kiran Cinema was a harbinger of change and modernity in its own right. It introduced the culture of movie theatres to the city. Between 1996 and 2005, it stuck to the risky but ultimately a profitable idea of screening only popular Hollywood hits such as Titanic, Jurassic Park, Harry Potter and James Bond movies. It was also one of the first places in Chandigarh to screen the live telecast of 2002 Football World Cup.

Om Prakash, who has been its caretaker for the last 37 years, reminisces about a very different Kiran from the one it is now.

“Jurassic Park witnessed the wildest response of all and ran for eight weeks straight. Schools would recommend the movie to children,” he recalls.

“People would be even willing to pay bribe to bag a ticket here,” Om Prakash recalls. Today, on a good day, 100 of the 500 seats are occupied. A ticket costs anything between Rs 41 and Rs 71.

The old 25-member team, comprising managers, operators, gatekeepers and even a typist, is now replaced by only four-five people, who don’t have much to do on the theatre premises.

Even though the footfall has drastically reduced, the theatre remains a special place for some.

“I have a few costumers, such as a former postmaster, who has been coming here for at least 37 years now,” says Om Prakash.

According to Om Prakash, it was when the internet became easily accessible that people stopped going to theatres. “Only people who truly love movies come here now,” he says.

People from neighbouring areas such as Kalka, Kharar and Ambala would also form an important part of Kiran’s clientele. “But all of that changed when the bus stand moved away from Sector 22,” he recalls.

Apart from the theatre, the owners earn revenue by renting out a part of their office to a ticketing service and a panwadi who has a shop beside the theatre.

According to Om Prakash, the owners only visit once in every few years.

“Even though it’s a heritage property, only the developer can make future plans for Kiran Theatre since it is a private property,” says a senior official of the Department of Architecture, UT. “A meeting was held with the owners several years ago who wanted to convert it into a multiplex,” he adds.

Further, a high-level committee was set up to decide its fate. The panel, however, never met. The architecture department has also considered offering the owner land in lieu of his stake in the theatre, but nothing has materialised yet.

According to Deepika Gandhi, Director, Le Corbusier Centre, several heritage single-screen theatres have been converted into niche theatres which have retained their single-screen status. “Kiran Theatre can also create a new vibe. The area in the front can be used to make a food court. It can screen rare documentaries and niche cinema. That’s what they have done across the world,” she adds.

According to Prof Bagga, Kiran could also consider renovating only from the inside and installing small screens like Jagat Theatre. “We should devise a method that respects the historicity of the place while keeping up with the times using state-of-the-art technology,” she added.