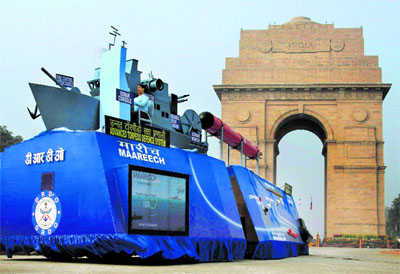 The Maareech Advanced Torpedo Defence System developed by the DRDO on display during the 67th R-Day parade at Rajpath in New Delhi. The DRDO was set up in 1958. PTI

Consider the following: India was the world's largest importer of major arms from 2010 to 2014, accounting for 15 per cent of the global total. This amounted to three times more imports than China and Pakistan, both of which are nuclear weapon states, major adversaries and the country's biggest neighbours. In monetary terms, between 2010 and 2014, India paid a staggering Rs 1,03,535 crore for capital acquisitions from foreign vendors. In contrast, India earned a paltry Rs 1,644 crore on defence exports in the three-year period from 2010 to 2012.

A major defence export contract that India signed in recent years is the sale of seven indigenously produced Dhruv advance light helicopters to Ecuador for $45 million in 2008. And this has run into trouble. Within six years, four of these helicopters crashed, forcing the Ecuadorian government to place restrictions on flying the remaining three thus putting a question mark on Brand India as a maker of defence equipment. Dhruv's flight safety record has been even worse in India with the armed forces losing as many as 16 Dhruv helicopters in an 11-year period, from 2005 to 2015.

Overall, India's self-reliance index has remained static at about 30 per cent for the last two-and-a-half decades, with 70 per cent of the country's defence requirements being sourced to foreign vendors making the Indian armed forces overly import-dependent. Even India's 30 per cent indigenous capacity is suspect as it is based mostly on transfer of imported technology and a “buy-and-assemble” principle. This has led defence scientists and engineers to derive comfort rather than pursue a quest to create indigenous capabilities.

It is not that previous governments have not made efforts to increase indigenisation. Soon after the disintegration of the Soviet Union, which until then was India's most important source of defence equipment, a specially established “Self-Reliance Review Committee” conceived  a “ten-year plan for self-reliance in defence systems,” starting from 1995, aimed at increasing India's self-reliance index to 70 per cent by 2005. This seemingly unrealistic deadline remained a pipe dream. Since then, several studies have been conducted to examine what can be done to increase India's self-reliance capability so as to reduce dependence on imports. More recently, a Ministry of Defence committee has now suggested 2027 to be set as the revised target for achieving 70 per cent indigenisation.

Since the 1990s, the Government has taken a number of steps to realise the make-in-India dream. Permitting forging of an Army-industry partnership and an Air Force-industry partnership, starting from the early 1990s; devising of a defence procurement procedure (DPP) in 1992, which has since been  reviewed, revised and updated eight times (in 2002, 2003, 2005, 2006, 2008, 2011 and 2013), with the latest DPP expected to be notified in two months. Other measure taken are: opening Indian private sector participation in developing defence equipment to up to 100 per cent; an offset clause in all foreign defence purchases worth Rs 300 crore (it is now being revised to a minimum Rs 2,000 crore); and permitting foreign direct investment from an initial 26 per cent to currently 49 per cent to even 100 per cent in identified areas of critical technologies subject to cabinet approval. The DPP-2016 even proposes 90 per cent funding to private companies to develop defence equipment to give private participation a boost. The question is whether these measures are enough. The answer is probably not. India has made little headway in achieving self-reliance, despite a large state-owned infrastructure comprising a Defence Research and Development Organisation or DRDO (established almost 60 years ago in 1958), eight defence public sector units, 40 ordnance factories and 50 government-owned research and development laboratories. There are serious doubts whether India even possesses competence and know how to develop core or high-end technologies.

The DRDO, which has a history of time and cost overruns, has been unable to develop a reliable rifle for the Army let alone an engine for the main battle tank (Arjun). Attempts at developing the Kaveri engine for the Tejas light combat aircraft have resulted in failure as have attempts at developing an airborne early warning and control system (AWACS) radar, to be mounted on an aircraft. The list of such failures is long. The DRDO's limited success lies only in developing a few variants of the Prithvi and Agni surface-to-surface missile and some sub-systems for ships and aircraft, to name a few. So does the Government expect the private industry to achieve what the state- owned industrial complex has been unable to? It cannot be an “either-or” solution. Both have a role to play as has been the case in the United States, Israel and other western countries. The DRDO, whose functioning has been described as “disappointing” and been accused of “poor conceptualisation and over ambition in trying to make world class products” by a report on its functioning prepared by a Parliamentary Standing Committee on defence, needs major restructuring. It needs to focus on fewer but high-end technologies of strategic significance. After all, the Indian Space Research Organisation (ISRO) has developed into a world-class space agency and could be a model that needs studying.

Perhaps the Government needs to give serious thought to some advice proffered by the Nobel laureates who attended the recent Science Congress held in Mysuru earlier this month. A “Make-in-India” programme, they observed, will not benefit the country in the long term unless it is backed by sustained investments in basic science and the fostering of the spirit of curiosity. Suggesting that Make in India be replaced with the slogan “Discover, Invent and Make in India”, American Nobel laureate in Physics (2004), David Gross, observed that: “New inventions, technologies, products that can compete on the world stage are in the end based on new discoveries, new understanding of the workings of nature — what we call basic science, which eventually translate into applied science and technologies”. French Nobel laureate in Physics (2012), Serge Haroche, was quoted, saying: “The challenge for democracies, including India, is in getting politicians now focused on short-term electoral gains to invest in long-term goals like the development of basic science”. Indeed, in order to be an economic superpower, India must first strive to be a science and technology super power which China has achieved with a considerable measure of success.

For the past 15 years, India has been investing an average of just 0.9 per cent of the GDP in research and development,  compared to 2.7 per cent by the US, 2.1 per cent by China and 4.4 per cent by South Korea. The government needs to seriously work out a doable roadmap with a clear time frame in order to make “Make in India” happen. Else, Prime Minister Narendra Modi's call for “Make in India” will remain just another slogan. In the meantime, considering that New Delhi is unlikely to pull off any miracles in achieving self-reliance, India is expected to spend a staggering $620 billion (Rs 41 lakh crore) on defence imports between 2014 and 2022.