NEW DELHI: The death toll in the Kerala floods increased to 91 on Tuesday with an “extremely heavy rain” warning issued for three districts, even as the weather in deluge-hit Karnataka and Gujarat improved, allowing the authorities to speed up rescue and relief operations. 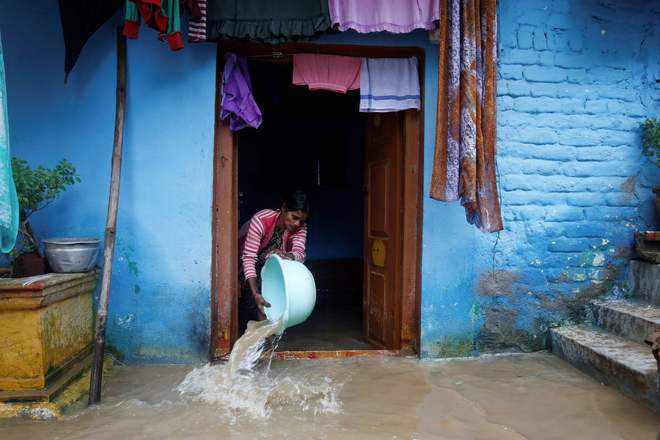 A woman tries to clear floodwaters from her home in Hunsur town of Karnataka on Tuesday. AFP

The death toll in the Kerala floods increased to 91 on Tuesday with an “extremely heavy rain” warning issued for three districts, even as the weather in deluge-hit Karnataka and Gujarat improved, allowing the authorities to speed up rescue and relief operations.

In Kerala, a red alert has been issued for Ernakulam, Idduki and Alappuzha as extremely heavy rains are expected in central areas of the state.

Due to strengthening of low pressure in the Bay of Bengal, heavy rains are expected to lash several parts of the state, said K Santosh, IMD Director in Thiruvananthapuram. The state government said the toll is likely to go up as 59 people are still missing.

Rescue operations in Maharashtra’s flood-hit Kolhapur and Sangli districts are over, officials said, adding that with waters receding, the focus is now more on providing essential supplies to the affected people. The situation has also improved in flood and heavy rain-affected districts of Karnataka and inflows in reservoirs are also steadily decreasing, the government said.

Eight persons were killed in Odidha due to heavy rain triggered by formation of two back-to-back low pressure areas, while fear of flood loomed large in several areas, officials said. Train services were affected in parts of west Odisha as water submerged tracks in some places as incessant rain pounded districts such as Boudh, Bolangir, Kalahandi, Kandhamal and Subarnapur districts, they said. Two rain-related deaths were also reported from UP where several parts saw overnight showers. — PTI

Mumbai: Maharashtra would seek Rs 6,813 crore Central aid to tackle the flood-induced crisis, Chief Minister Devendra Fadnavis said. The proposal would be forwarded to the Centre soon, he said. "A committee of experts will be set up shortly to recommend measures if the state again witnessed the kind of rainfall it received in the last four days,” Fadnavis said. ians

The Centre has sanctioned Rs 52 crore immediate assistance to Kerala, while the state government has sanctioned three-month free ration for the flood victims.