Rush for the Afghan pie

Given his distaste for military interventions abroad, President Trump has announced his decision to expedite withdrawal of US forces from Syria and Afghanistan. 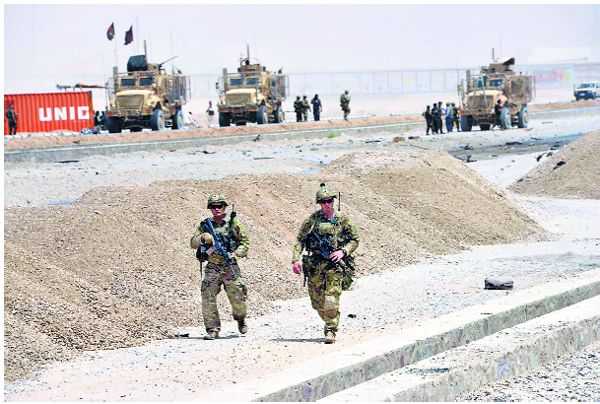 EXIT MODE: US plans to scale down its military presence have made allies nervous.

Given his distaste for military interventions abroad, President Trump has announced his decision to expedite withdrawal of US forces from Syria and Afghanistan. His critics say this would amount to betrayal of US allies. Despite criticism, it now appears clear that the US intends to progressively reduce and end military land operations in Afghanistan. It has already reduced its military presence to 14,000 troops, with plans to halve the number in a short period.  A swift military takeover by the Taliban would raise security concerns in India, given the past Taliban role in colluding with the hijackers of IC 814. The Taliban has also provided training facilities and bases for groups like the Jaish-e-Mohammed, which was responsible for the attack on India’s Parliament.

Pakistan continues to provide the Taliban military and intelligence support, together with bases on its soil.  Taliban vice-president Sirajuddin Haqqani resides in and operates from Pakistan. An economically vulnerable Pakistan, whose foreign exchange reserves have dwindled to $6 billion, however, faces huge international pressure, from friends and foes alike, to end this support. The Financial Action Task Force is turning the screws on Pakistan, to end its support for terrorism, or face sanctions. Saudi Arabia and the UAE have offered to provide financial support to Pakistan, amounting to around $6 billion for oil imports. But Pakistan realises that its economy would collapse, without US-backed IMF assistance. The US has linked such assistance to the ISI ending support to terrorism.

China may claim to be generous, but across Pakistan, there is a growing feeling, similar to that in countries like Sri Lanka, Myanmar, Malaysia and Kenya, that China leads every ‘aid’ recipient into a ‘debt trap’.

It is crucial for New Delhi to continuously assess how diplomacy surrounding the ‘endgame’ of American withdrawal from Afghanistan plays out. The withdrawal will inevitably lead to a greater role for the Taliban in Afghanistan’s national life. The Afghan government is concerned that Trump’s instinctive and ill-advised ‘Tweet Diplomacy’ can have disastrous results in Afghanistan and its neighbourhood.

The Taliban now controls, or actively contests, the government’s control in around 45% of Afghanistan’s territory. The Afghan security forces are taking heavy casualties, losing on an average 30-40 members every day. Important urban centres like Ghazni have been taken over by the Taliban for days. Presidential elections in Afghanistan have been postponed, following US pressure. President Ghani responded strongly on December 26, with the appointment of two former intelligence chiefs, firm opponents of ISI-sponsored terror, to key positions. Amrollah Saleh, a Tajik and erstwhile Ahmed Shah Masood loyalist, has been appointed interior minister; and Asadullah Khalid, a Pashtun, who was seriously wounded in a Taliban attack, is the new defence minister. This is an important move, reiterating the government’s resolve, evidently with US backing, to take on the Taliban strongly.

These developments have been accompanied by frenetic diplomatic activity by Pakistan’s foreign minister Shah Mehmood Qureishi, purporting to demonstrate that Pakistan is making every effort to involve major powers — notably, the US, Russia and China — in a quest for peace and stability in Afghanistan. This has accompanied the appointment of Zalmay Khalilzad, an Afghan-American, with vast experience of Pakistani machinations in Afghanistan, as Trump’s envoy, to coordinate American contacts with external powers and all major parties in Afghanistan, including the Taliban. External powers are, however, treading on one another’s toes in this effort. A conference convened in Moscow by Russian foreign minister Sergei Lavrov, without any senior official American participation, saw formal participation by the Taliban, Pakistan, China and Central Asian republics. India made common cause with the Afghan government and was not represented at the conference by serving government officials, but by former diplomats. India made it clear that it will not formally endorse any initiative that equates a constitutionally-elected government in Afghanistan, with a medievalist, armed insurgent group.

There are now several countries with a finger in the Afghan pie. The Taliban has an ‘office’ in Qatar, set up with US blessings. Teheran has been having a secretive ‘dialogue’ with the Taliban. These Iranian contacts with the Taliban, undertaken with Pakistan’s ‘approval’ and  ‘facilitation’, gathered momentum after the death of Taliban founder Mullah Omar. A Taliban delegation visited Iran last month for formal discussions with Iranian leaders. In the meantime, the US has brought in Saudi Arabia and the UAE to facilitate talks with the Taliban. The first round of talks involving representatives of the US, Saudi Arabia, the UAE, Pakistan and the Taliban were held in Abu Dhabi in December. The US has evidently decided that the UAE and Saudi Arabia are more useful in such talks than Qatar, which hosts a Taliban ‘office’.

Rivalries between Russia, China and the US have spread across the Islamic world, pitting countries like the UAE and Saudi Arabia on the one side, with Turkey, Iran and Qatar on the other. Uncertainties in Afghanistan’s neighbourhood are set to make the Afghanistan-Pakistan region even more volatile, especially given the persecution of Muslims in China’s neighbouring Xinjiang province. A growingly bankrupt Pakistan, now persuaded that its economy could collapse without an IMF bailout, is trying to balance contradictions between its support for the Taliban and other radical groups on the one hand, and its desperate need for assistance from the US, Saudi Arabia and the UAE on the other.

New Delhi, in turn, will have to not only deal with rivalries between Islamic countries across its western neighbourhood, but also deal with the pressures arising from policies of the US, Russia and China.