Sahara swung between lush and desert conditions every 20,000 years

WASHINGTON:The Sahara desert—one of the harshest, most inhospitable places on the planet—has swung between wet and dry climates every 20,000 years, a study has found. 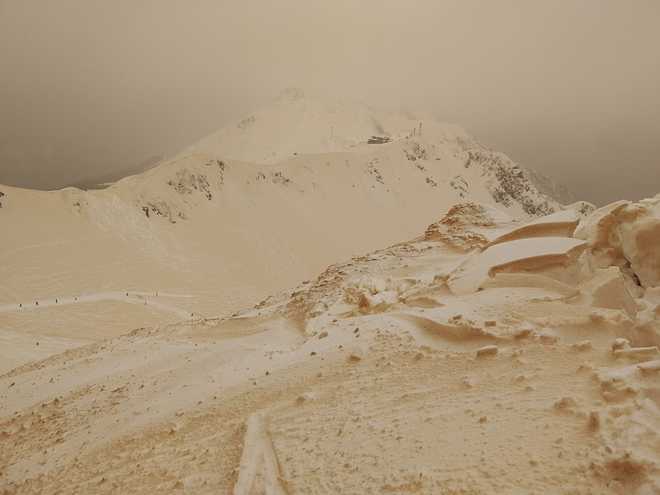 The Sahara desert—one of the harshest, most inhospitable places on the planet—has swung between wet and dry climates every 20,000 years, a study has found.

The Sahara desert covers much of North Africa in some 3.6 million square miles of rock and windswept dunes. However, it was not always so desolate and parched, scientists say.

Primitive rock paintings and fossils excavated from the region suggest that the Sahara was once a relatively verdant oasis, where human settlements and a diversity of plants and animals thrived.

Researchers at Massachusetts Institute of Technology (MIT) in the US analysed dust deposited off the coast of west Africa over the last 240,000 years, and found that the Sahara, and North Africa in general, has swung between wet and dry climates every 20,000 years.

According to the study published in the journal Science Advances, this climatic pendulum is mainly driven by changes to the Earth's axis as the planet orbits the sun, which in turn affect the distribution of sunlight between seasons -- every 20,000 years, the Earth swings from more sunlight in summer to less, and back again.

For North Africa, it is likely that, when the Earth is tilted to receive maximum summer sunlight with each orbit around the sun, this increased solar flux intensifies the region's monsoon activity, which in turn makes for a wetter, "greener" Sahara.

When the planet's axis swings toward an angle that reduces the amount of incoming summer sunlight, monsoon activity weakens, producing a drier climate similar to what we see today.

"Our results suggest the story of North African climate is dominantly this 20,000-year beat, going back and forth between a green and dry Sahara," said David McGee, an associate professor at MIT.

Each year the winds from the northeast sweep up hundreds of millions of tonnes of Saharan dust, depositing much of this sediment into the Atlantic Ocean, off the coast of West Africa.

Layers of this dust, built up over hundreds of thousands of years, can serve as a geologic chronicle of North Africa's climate history: Layers thick with dust may indicate arid periods, whereas those containing less dust may signal wetter eras.

Scientists have analysed sediment cores dug up from the ocean bottom off the coast of West Africa, for clues to the Sahara's climate history.

These cores contain layers of ancient sediment deposited over millions of years. Each layer can contain traces of Saharan dust as well as the remains of life forms, such as the tiny shells of plankton.

The researchers, examined layers of sediment deposited over the last 240,000 years. They analysed each layer for traces of dust and measured the concentrations of a rare isotope of thorium, to determine how rapidly dust was accumulating on the seafloor.

Thorium is produced at a constant rate in the ocean by very small amounts of radioactive uranium dissolved in seawater, and it quickly attaches itself to sinking sediments.

As a result, scientists can use the concentration of thorium in the sediments to determine how quickly dust and other sediments were accumulating on the seafloor in the past.

Researchers Sahara vacillated between wet and dry climates every 20,000 years, in sync with the region's monsoon activity and the periodic tilting of the Earth. — PTI