NEW DELHI: The Supreme Court on Monday asked the Election Commission to watch a biopic on Prime Minister Narendra Modi and inform it in a sealed cover if it could be screened during Lok Sabha polls. 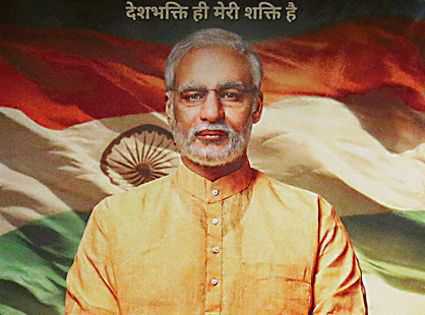 A bench headed by Chief Justice Ranjan Gogoi also directed the poll panel to submit its decision to the court in a sealed cover and said it would consider the matter on April 22.

The Supreme Court on Monday asked the Election Commission to watch a biopic on Prime Minister Narendra Modi and inform it in a sealed cover if it could be screened during Lok Sabha polls.

A Bench headed by Chief Justice of India Ranjan Gogoi asked the poll panel to watch the biopic, after senior advocate Mukul Rotatgi submitted that poll panel banned the film without even watching it.

The top court asked the Commission to send a report to it in a sealed cover by Friday and posted the matter for hearing on April 22.

Barely three days after the Supreme Court rejected a Congress activist’s petition seeking stay on the release of Vivek Oberoi-starrer biopic on Prime Minister Narendra Modi and left it to the Election Commission to decide if it violated Model Code of Conduct, the issue landed back in the top court on April 12.

The producers of the biopic challenged the Election Commission’s decision to ban the release of the biopic on Modi till the General Election was over.

The Bench had earlier said too much of time of the court was wasted on these non-issues.

The Election Commission had on Wednesday banned the screening of the biopic during the current poll period, saying any such film that subserves purpose of any political entity or individual should not be displayed in the electronic media.

The Commission, in a separate order, had also directed the producers “not to exhibit the film titled ‘PM Narendra Modi’ till further orders.

The Commission’s order came on April 10, a day before it was to be released, coinciding with the first phase of Lok Sabha elections. Votes for all 543 seats will be counted on May 23 after the end of the seven-phase polling on May 19.

Acting on the complaints of political parties, including the Congress, the poll panel had asserted that any biopic material with the potential to disturb the level-playing field should not be displayed in the area where the Model Code of Conduct was in force.

The copy of the order was also sent to the Central Board of Film Certification Chairman and Secretary, Information and Broadcasting Ministry.

“It is claimed that such creative contents are kind of surrogate publicity by the candidate or the political party during the period of model code. Though the display materials claim to be part of creative content, it is contended that these have propensity and potentiality to affect the level-playing field which is not in consonance with the provisions of the model code of conduct,” the EC had said.

The order had specifically stated that in view of the admitted acts and material available on record, this film being a biopic on Narendra Modi, “Prime Minister and a political leader and a prospective candidate in the current General Election”, cannot be exhibited in view of Commission’s order.

The EC order came after the apex court on Tuesday disposed of the petition filed by a Congress activist seeking stay on the release of the biopic, saying the poll panel was the right forum to decide the issue.