Sewer desilting yet to start in city

AMRITSAR: On one hand, the district administration has been making arrangements to tackle floods before the monsoon season, on the other, the Municipal Cooperation (MC) is yet to initiate the desilting of sewerage lines. 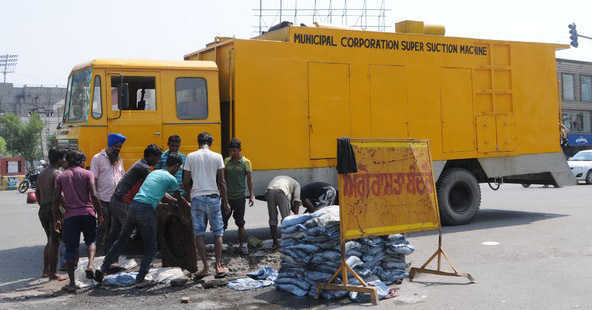 On one hand, the district administration has been making arrangements to tackle floods before the monsoon season, on the other, the Municipal Cooperation (MC) is yet to initiate the desilting of sewerage lines. Despite tall claims, desilting is expected to start with a delay.

As the civic body doesn’t have super suction machines for desilting the main sewage lines, it hires a company every year. The councillors and local representatives often start demanding desilting in their respective areas in March, but the MC never starts the work in time.

In the absence of timely desilting, city residents witness heavy waterlogging during rainy season. The MC cleans sewer lines in streets and localities manually. The civic body hires company to provide super suction machines for desilting in main lines. Super sucker machines are used for removing silt from sewage lines wider than 30 inches. These machines are equipped with CCTVs which record the suction process. The city is deprived of storm sewerage. Besides, the sanitation sewerage is insufficient to cater to the city’s population.

MC officials have called a meeting on the desilting issue on June 21.

Anurag Mahajan, Superintending Engineer, Operation and Maintenance (O&M) wing of the MC, said, “Desilting is not yet initiated. We have called a meeting in this regard. Further course of action will be decided in the meeting. Super suction machines will be hired. There is no delay. Desilting will be done before the monsoon.”