Shah flags off Delhi-Katra train, calls it gift to J&K 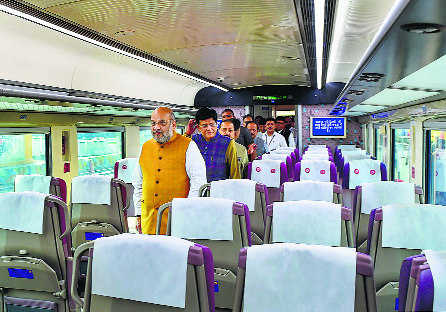 Union Home Minister Amit Shah today flagged off the Delhi-Katra Vande Bharat Express from the New Delhi railway station, calling it a “big gift” for Jammu and Kashmir’s development. He said with Article 370, the “biggest roadblock” in growth, gone, the state would be one of the most developed regions of the country within a decade.

“Delhi-Katra Vande Bharat Express is a gift for Jammu and Kashmir’s development and for promoting religious tourism,” the Union Home Minister, who was accompanied by Union Railway Minister Piyush Goyal and Union Ministers Jitendra Singh and Dr Harsh Vardhan, said.

The Railways has already opened bookings for the train that will start commercial operations from October 5. The minimum fare for New Delhi to Katra travel in chair car is Rs 1,630, while it’s Rs 3,015 for executive chair car.

The train will run on all week days, except Tuesday, and will cut the travel time between Delhi and Katra to eight hours from 12-14 hours earlier to traverse a distance of 655 km. It will depart from the New Delhi at 6 am and reach Katra at 2 pm. It will return the same day from Katra at 3 pm and reach New Delhi at 11 pm.

Railway officials said the train would run at a maximum speed of 130 kmph with three stops at Ambala Cantt, Ludhiana and Jammu Tawi.

The decision to run the train was taken following the success of the Vande Bharat Express plying between New Delhi and Varanasi which was flagged by Prime Minister Narendra Modi on February 15 this year.

The Integral Coach Factory (ICF) has made changes to the existing design of the train. “To avoid damage due to stray cattle, the train has been equipped with a sturdy aluminium nose cover. And to guard the window shields against stone-pelting, a special film has been provided,” a Railway official said.

More space has been provided to store meals for passengers. Besides changes in the exterior and interior, the ICF has added a slew of modern features like adjustable seats, improved wash basins, automatic doors, wi-fi and infotainment system.

“The Railways will connect the country from Kashmir to Kanyakumari before August 15, 2022,” said Goyal.