Sharing the pain, beyond the Border

The land has been divided into two countries but the sense of shared heritage has remained undivided. 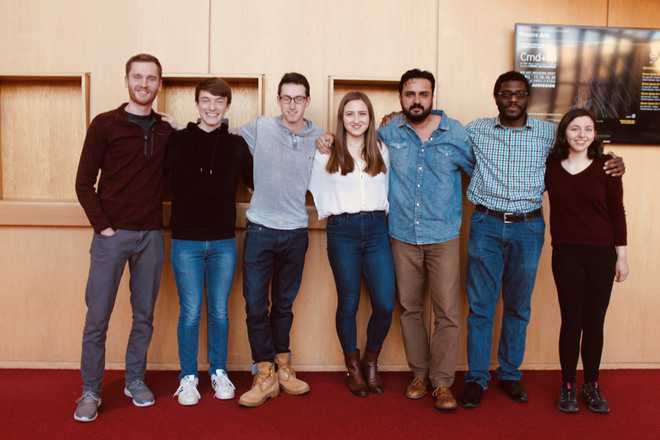 Spotlight on history: Ikram Basra (third from right) with the cast of the play; Brandon Shaw (second from right) plays Shaheed Udham Singh

THE land has been divided into two countries but the sense of shared heritage has remained undivided. The colour of national flags is different but the legacy of pain has similar hues. The blood of thousands killed and wounded in the Jallianwala Bagh massacre may have seeped into the soil of Amritsar but it has left a permanent stain on the souls of generations of Punjabis — on both sides of the border.

The suppressed rage of the oppressed found an outlet in the written word. The massacre spawned a huge body of work — scholarly as well as literary. What was an outpouring in the immediate aftermath has not dried even after a 100 years. The gory happening has continued to anguish writers in this century as well.

In its centenary year, while the arc lights remain focussed on the massacre, an author and playwright from Pakistan has found his muse in Shaheed Udham Singh alias Ram Mohammad Singh Azad, who is said to be a witness to the butchery at the Jallianwala Bagh on April 13, 1919. Azad nursed his wounds for nearly two decades and finally avenged the mass murder when he shot Michael O'Dwyer in 1940.

“I was a child when I first heard about the Jallianwala Bagh massacre and Azad,” says Ikram Basra. “His persona and heroics fascinated me and have stayed with me ever since. Even for his times, Azad was an extraordinary man. Free from the confines of all religions, he believed in humanity. He knew very well the difference between violence and non-violence but did what he had to do to make the world aware about the British atrocities. At the time when the Empire was all powerful, Azad dared to challenge its supremacy and highlighted India’s perspective during his trial.”

Basra’s admiration for Shaheed Udham Singh has inspired his new play: “We All Were Sunflowers,” which follows Azad’s life. Basra (34) is currently a member of the Iowa Playwrights’ Workshop, a graduate programme at the University of Iowa, USA. His play will be presented next month at the Iowa New Play Festival 2019.

So what prompted him to write about it now? Did he think it would find a market during the centenary commemorations? “No,” laughs Basra, adding, “I wanted to write about the killings and Azad because I saw so much ignorance on the topic, especially in the West. I had written a poem about Azad a couple of years ago. A sense of it being incomplete kept haunting me.”

“When I read my poem about Azad and the massacre to some professors and students, no one was aware of the Jallianwala Bagh incident. One of the lecturers had been on a teaching tenure to Delhi, and even he didn't know what had happened. That’s when I thought I must tell people this story,” adds the playwright, who is also a poet and lyricist.

What started as a small poem then turned into a full-fledged play with some interesting characterisation — one of the characters in the play is named Mitti. Azad is haunted by Mitti, a woman who is traditional Indian dancer, distressed mother, and poetic face of the land. “Mitti is what we are made of. It is our essence. Azad loved his mitti, his wattan (country), even more than his life.”

Although the play is based on events that took place 100 years ago, Basra has also captured the contemporary reality of the subcontinent through the character of ‘vultures’. “For the common man, the yoke only changed from a foreign ruler to a local one,” adds the playwright.

In an interesting aside, the character of Azad is being played by Brandon Shaw, who is black, as there are hardly any Indian students on the campus. But then it is only befitting, for the revolutionary rejected the human division based on caste, creed, colour or religion.