This year’s ASER results brought good news on the learning front after a long time. Learning levels were up in Classes III and V at the all-India level. 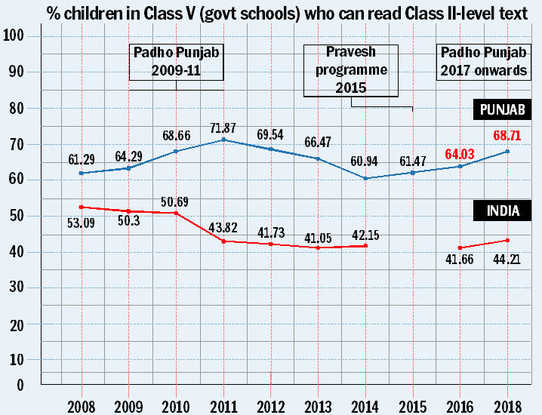 This year’s ASER results brought good news on the learning front after a long time. Learning levels were up in Classes III and V at the all-India level.

Between 2005 and 2014 — the first 10 years of ASER — three main trends emerged from the data: First, learning levels were low and slow to change till 2010. There was very little change in learning levels at the national level till 2010 and a slight decline after that.  The decline, after 2010, was witnessed in government schools, with learning levels in private schools holding up or improving slightly. Second, while children did learn as they progressed through school, these learning trajectories were fairly flat.  Even in Class VIII, close to one-fourth of the children were not fluent readers.  And, third, there was a year-on-year increase in private school enrolment. By 2014, almost one-third of rural children were enrolled in private schools.

While these changes may seem minor, these are not insignificant; there is a lot of variation across states, with some showing gains of close to 10 percentage points in 2018. So, what has changed?  For one thing, there is general acceptance of the fact that India is facing a ‘learning crisis’, requiring urgent action. Since 2014, the government has initiated a slew of learning assessments; the National Achievement Survey (NAS) is being done more regularly and the results are now available at the district level. The ASER-2018 results seem to indicate that there have been changes in teaching-learning in schools as well. While recognising the problem is the first step to solving it, concrete steps are needed to do so.  And here a few states like Punjab, Delhi, Himachal Pradesh, Karnataka and Uttar Pradesh have taken the lead and initiated programmes to improve learning levels. Since ASER is done every year and has large sample sizes at the state level, it is able to pick up even small changes at that level.  Punjab’s case shows that simple and easy-to-implement policies can result in large learning gains in a short period.

In 2009, the state introduced the Padho Punjab programme in all its primary schools.  The programme constituted a simple intervention to improve learning levels of children who were lagging in basic reading and arithmetic. The programme used Pratham’s ‘Teaching at the Right Level’ (TaRL) approach, wherein for a few hours every day, children are grouped according to their current reading/maths level and taught according to the level of the child rather than a prescribed age-grade syllabus. Learning goals are simple and clear — moving up to the next level, and ongoing measurement to assess progress. This programme ran for two years till 2011, when it was discontinued. Its variation, called Pravesh, was introduced in 2015. Padho Punjab was restarted in 2017, when it was extended to upper-primary grades as well.

An analysis of the percentage of Class V government schoolchildren who can read a Class II-level text between 2008 and 2018 shows that Punjab bettered the all- India average throughout this period. Between 2010 and 2016, when the all- India reading levels were falling year-on-year, no such trend was observed in Punjab. Learning levels in Punjab rose between 2008 and 2011; fell between 2011 and 2014; and have been rising since then. The periods when learning levels were rising coincide with the Padho Punjab phases in the state. A similar picture is seen for basic maths levels as well (2015 was a gap year for the all-India ASER. Only Punjab and Maharashtra were covered that year).

Between 2016 and 2018, at the all-India level, no improvement in learning levels is observed in upper primary grades. In Punjab, however, big jumps were witnessed in maths ability in Classes VI-VIII. The second phase of the Padho Punjab programme in upper primary grades focused on strengthening foundational skills in maths.

In the past few years, the focus has clearly shifted from enrolment to learning in education.  In 2017, an amendment to the RTE Act required all states, except Jammu and Kashmir, to prepare “class-wise, subject-wise learning outcomes for all elementary classes” and also to devise “guidelines for putting into practice continuous and comprehensive evaluation, to achieve the defined learning outcomes.”  But, before we talk about grade- appropriate learning outcomes, we must ensure that all children have acquired basic foundational skills of reading and arithmetic.  Some states have already taken the lead on this front and confronted  the problem head-on. Hopefully, the others will follow suit.

The writer is Director, ASER Centre