JAKARTA:PV Sindhu beat unseeded Mia Blichfeldt of Denmark to claim a quarterfinal berth in the women&rsquo;s singles event of the Indonesia Open. 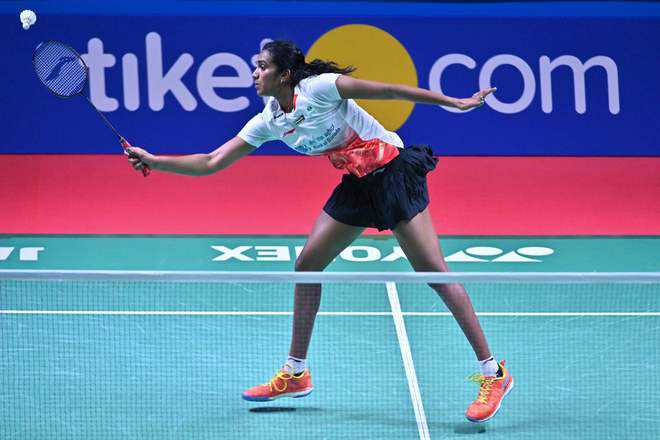 PV Sindhu beat unseeded Mia Blichfeldt of Denmark to claim a quarterfinal berth in the women’s singles event of the Indonesia Open. Sindhu, seeded fifth, slugged it out for one hour and two minutes to get the better of Blichfeldt 21-14 17-21 21-11 in a second-round encounter.

It was Sindhu’s third win over the world No. 13 Dane this year. The Indian had earlier defeated Blichfeldt in straight games in the Indian Open and the Singapore Open. Sindhu will next face Japanese Nozomi Okuhara, who beat Soniia Cheh of Malaysia 21-7 21-16.

Blichfeldt took a 6-3 lead before the Indian drew level. Sindhu relied on her long reach and smashes to pocket the first game 21-14. The second game witnessed a tough fight between the two shuttlers but Blichfeldt made a strong comeback to take a 9-5 and then a 10-7 lead. Sindhu then pocketed three straight points to level the score at 10-10. But the Dane took full advantage of the Indian’s unforced errors to clinch the second game. The decider, however, turned out to be a one-sided affair as Sindhu ran away with the game after some initial resistance from Blichfeldt.

Kidambi Srikanth went down to Angus Ng Ka Long of Hong Kong 17-21 19-21 in 39 minutes. Satwiksairaj Rankireddy and Chirag Shetty lost 15-21 14-21 to top-seed Marcus Fernaldi Gideon and Kevin Sanjaya Sukamuljo in the second round.