MOHALI:A six wicket haul by Karanveer helped Moga gain a small but vital four-run lead against hosts Mohali after the visitors were bundled out for 102 runs in their first innings on the opening day of their U-16 Markan Trophy match at the newly-built PCA Stadium at Mullanpur today. 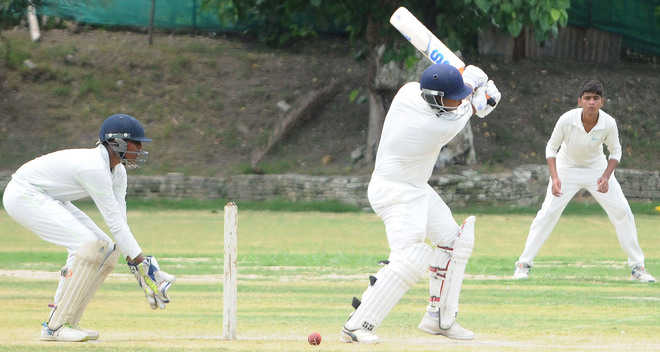 A batsman attempts a shot on the first day of the Punjab State Inter-District U-16 Tournament match between hosts Patiala and Sangrur on Tuesday. Rajesh Sachar

A six wicket haul by Karanveer helped Moga gain a small but vital four-run lead against hosts Mohali after the visitors were bundled out for 102 runs in their first innings on the opening day of their U-16 Markan Trophy match at the newly-built PCA Stadium at Mullanpur today.

Defending a below-par total, Karanveer, in company of skipper Mukanddeep Singh and Navjeet, struck at regular intervals to bowl out the hosts for 98 runs.

Mohali had a disastrous start to their innings, losing five wickets for just eight runs. Aryan Bhatia and Raghuvar Narang tried to weather the storm with some dogged defence. The duo batted 28.4 overs before Navjeet put an end to the 56-run partnership between the two. Narang was trapped in front after facing 92 balls for his 16.

Bhatia then raised 27-run stand for the seventh wicket along with Sehajman Singh and pushed the hosts close to the Moga total. However, his dismissal brought an early end to the Mohali innings as the side their remaining three wickets for the addition of just eight runs.

Bhatia was sent back by Karanveer after scoring a 134-ball 61, which included 10 boundaries.

Earlier, put in to bat, Moga batsmen failed to stitch any valuable partnership and were bowled out for 102 runs in 40.1 overs. Himanshu was the pick of the bowlers for the hosts, claiming 5/19 in his 13.1 overs. Sehajman (2/19) and Aarav Mahajan (2/21) picked two wickets apiece.

Skipper Mukanddeep (28) was the top scorer for Moga. Karanveer made 14 runs, while Harmanjot Singh remained not out on 15.

At Gandhi Grounds in Amritsar, the hosts were batting on 157/3 after dismissing Muktsar for 114 runs.

At the close of play on Day 1, skipper Arshdeep Singh was batting on 58 and giving him company at the other end was Arpit Rajput on 11.

Earlier, Fatehdeep Singh claimed 5/20 to bundle out the visitors for a sub-par total in their first innings after Muktsar skipper Uday Kakkar won the toss and elected to bat.

Opener Arpan Singh (45) did the bulk of scoring for the visitors.

Mohali: Mohali will face Ludhiana in their opening match of the Punjab Inter-District One-Day Tournament for FC Mittal Trophy on Wednesday, the Punjab Cricket Association said here on Tuesday. Apart Mohali and Ludhiana, teams from three more districts — Patiala, Jalandhar and Amritsar — will compete in the tournament. Patiala is scheduled to host Jalandhar in their opening game on Wednesday, while Amritsar will open their campaign against Mohali on August 17. The top two teams will reach the final, which is scheduled to be held on August 25. The matches will be supervised by the PCA panel umpires and scorers and will be watched by the members of the Punjab senior selection committee.TNS