It begins in Manipur&hellip; both the terror attack and the anti-terrorist operation set the tone of the film. 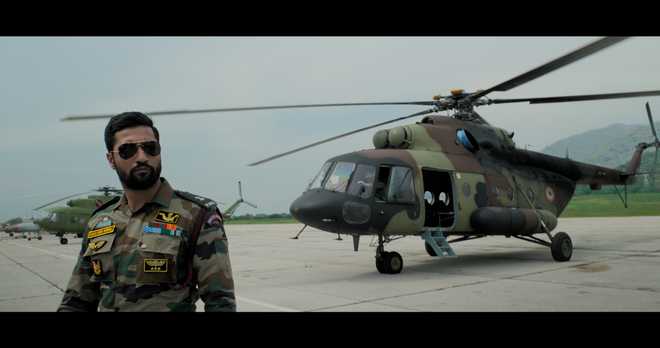 A still from the film ''Uri: The Surgical Strike''.

It begins in Manipur… both the terror attack and the anti-terrorist operation set the tone of the film. It is war on terror and as we are reminded the face of new India, ready to pay back to our cheeky neighbour too in the same coin. Uri as the full title of the film suggests we all know is about the surgical strikes that India conducted in POK in 2016.

Is it a story waiting to be told as its makers have been constantly telling us or propaganda that the ruling government can encash upon in an election year? In the uneasy answer lies the political core of the narrative. Well, whatever may be the politics of surgical strikes and whatever may be your political affiliation, Uri does make you feel strongly for the Indian Army. Our brave soldiers have feelings too comes early on in the film. Major Vihaan Shergil has a family, an Alzheimer-ridden mother (Swaroop Sampat), a sister and more importantly an equally brave Army officer Karan (Mohit Raina) as brother-in-law. Devon Ke Dev Mahadev Mohit Raina makes an impressive big screen debut, only his role though crucial is a bit short for lasting impact. So, it’s Vicky Kaushal as brave-heart Major Vihaan who leads the charge and is both understated and intense.

Those clued in to everyday events and current affairs are already aware of the precursors, call it provocations by Pakistan that led to the surgical strike. For the uninitiated the film recounts it all. You see clippings of Gurdaspur and Pathankot attack before it builds up the inhumane Uri attacks followed by retaliatory response of Indian Army at the behest of powers that be.

Modi Bhakts are likely to rejoice. With Rajit Kapoor enacting his part, he and his team especially chief security adviser (Paresh Rawal) do come across as few good men motivated by the welfare of the nation at the macro level and valorous soldiers at the micro. If you are on the other side of the political divide, you can certainly take issues with this ‘thumbs up’ portrayal of the ruling dispensation.

But beyond the contentious issues which the film refuses to raise, it does score many points as the treatment is on point. The cinematography by Mitesh Mirchandani is as remarkable as the fight sequences. Indeed, the actual operation begins only in the later part but the countdown begins early. Films of this genre as a rule are drowned in jingoism and unnecessary sloganeering. But not Uri, which has a sprinkling of dialogues Unhe Kashmir chaheeye aur humein unka sar… yet is restrained enough.

Riveting and tugging at your emotional chords, the director gets most of the technical details right. Of facts, we can only speculate…the drone bit in particular seems a figment of imagination. Yet, crafted with precision, the feel and tenor don’t go over the top. Dhar has you invested as much in the lead character as the mapping of the operation drama. He plots the details with craft. The only downer are the hand-to-hand combat scenes, probably employed to up the star quotient of our lead hero Vicky Kaushal whose character by the way is spurred as much by personal revenge as patriotic fervour. Without a doubt, the film’s cause would have been served better sans this unnecessary act of bravado on his part. Its attempt at gender balance (Yami Gautam and Kirti Kulhari in bit parts) too is cosmetic.

Indeed, the film does instil you with patriotism and respect for the Army and mercifully ends sans overt showmanship. In the long run, however, it will have you wondering about the implicit message; is eye for an eye really an ideal new India should espouse?