‘Other’ Sonia packs a punch

NEW DELHI:Sonia Chahal has been dealing with a peculiar problem for some time now. 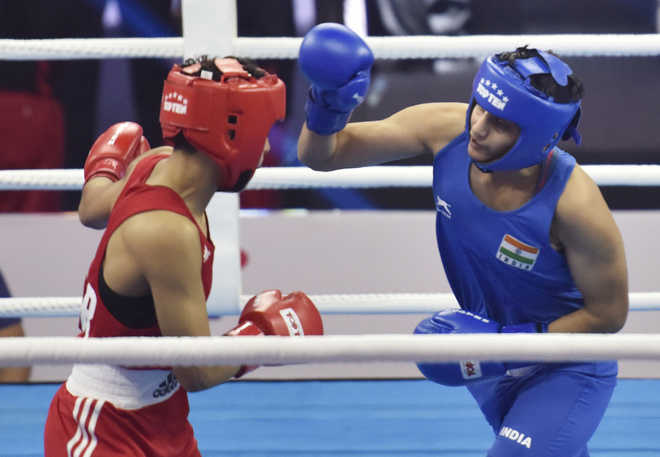 Sonia Chahal has been dealing with a peculiar problem for some time now. For some strange reason, she's often mistaken for senior pugilist Sonia Lather, a silver medallist in the 2016 World Championships. Even though Sonia goes by her first name in official documents, the 21-year-old 57kg pugilist often finds people addressing her as 'Lather'. Worse, there have been instances when Sonia Lather has been congratulated for Sonia Chahal’s heroics. Sometimes, even the broadcasters get it wrong. On Saturday, when she hammered Morocco's Doaa Toujani 5-0 in her opening bout to enter the pre-quarters, the 'Lather' surname, almost on cue, flashed on the screen.

“It is really strange. I won the senior Nationals last year and a few people and some local leaders called up Sonia Lather to congratulate her!” said Sonia. “Even people in the media get it wrong. In a few articles and pictures I've been mentioned as Sonia Lather. But it is no big deal really. We share the same first name, both are from Haryana, so I can understand.”

Incidentally, Sonia is the reason why her namesake isn't competing at the Championships. Following her first-round exit at the Asian Games, Sonia Lather was beaten by Sonia Chahal in the Inter-Railway meet, ending her chances of making the cut for the Championships.  “I am very happy with today's win. It is a big step for me, my first bout in such a big competition,” Sonia said.

Sonia comes from Bhiwani's Nimri village. She was inspired by Arjuna Award winner and two-time World Championships bronze medallist Kavita Chahal, who hails from the same village, to take up boxing. Her conservative family stood in the way, but a six-month training stint under Jagdish Singh at the famous Bhiwani Boxing Club removed that hurdle. “My family was not in favour of me living and training in Bhiwani. But my silver medal in the School Nationals in 2011 made things easier,” recalled Sonia. “I won that silver after having trained for just six months. After that my brother Sumit stayed with me in Bhiwani for three years, helping me train and spar. He and my coaches are the reason behind whatever I've achieved,” she said.

Pinki Rani and Simranjit Kaur, too, entered the pre-quarters. Saturday's three wins make it five out of five for India — Manisha Moun and Sarita Devi had won their round of 32 bouts yesterday. While Pinki defeated Armenia's Anush Grigoryan in the 51kg category, Simranjit edged past USA's Amelia Moore with a similar margin in the 64kg category.