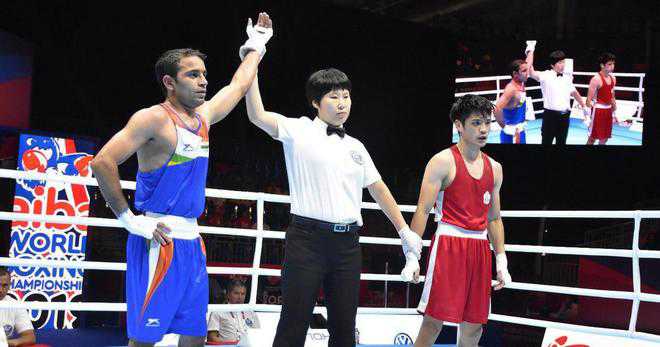 The second-seeded Panghal, who had been given a first-round bye, will be up against Turkey’s Baluhan Citfci in the pre-quarterfinals. Sharp as ever with his attacks, Panghal dominated Po-Wei from the first round itself to notch up a comfortable win. Po-Wei spent most of his time trying to avoid any engagement, prompting the referee to caution him against the passive approach.

“I had fought him earlier as well in the Asian Championships’ first round and won 3-2. This time I was keen to ensure that the fight was not that close and I managed to do that,” Panghal, 23, said. “I decided to be aggressive from the very first round and log as many scoring punches as possible,” he added.

In the evening session, Kaushik, competing in his maiden World Championships, was equally ruthless against Lacruz. Kaushik had little trouble connecting his combination punches against an opponent whose defence was mostly non-existent. — PTI