Bisht gets gold, Thapa settles for silver : The Tribune India 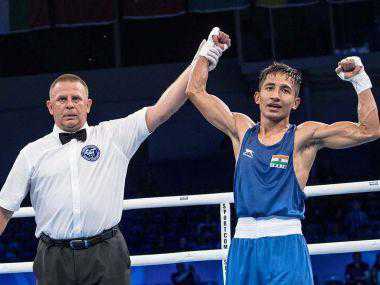 Kavinder Singh Bisht beat Mohammed Hussamuddin in the 56kg final at the 38th GeeBee Boxing Tournament in Helsinki on Sunday.

In a rare all-Indian final, a gritty Bisht beat Hussamuddin. Both the boxers are from the Services Sports Control Board and the familiarity with each others’ techniques was apparent in the intense bout. But it proved to be Bisht’s day as the Navyman overcame a cut sustained above his right eye in the final round to emerge triumphant against his Army rival. The boxer from Uttarakhand is a World Championships quarterfinalist in the flyweight category and this was his maiden international gold after making the jump to bantamweight.

Sahani started off strongly against Thailand’s Thitisan Panmod in his summit showdown, clinching the opening round unanimously. However, Panmod found favour with the majority of the judges in the next two rounds and the messy bout ended 3-2 in the flamboyant Thai boxer’s favour. Thapa (60kg), a bronze winner at the World Championships, lost 4-1 to local favourite Arslan Khataev. In an intense battle, Thapa claimed the final round honours but the judges ruled the first two rounds in favour of Khataev.

Dagar, a silver medallist at last year’s India Open, was up against Commonwealth Games gold medallist Pat McCormack of England. The Indian entered the bout with a heavily swollen left eye due to an injury sustained in the semifinals. McCormack, a two-time European silver medallist, was expectedly the more aggressive of the two boxers. But to Dagar’s credit, he fought hard and withstood three eight-counts before the referee ended the contest a few seconds into the third round.