PALLEKELE: India captain Virat Kohli doffed his cap to Sri Lanka’s Akila Dananjaya after the 23-year-old’s mesmerising spell in the second ODI in Pallekele on Thursday. 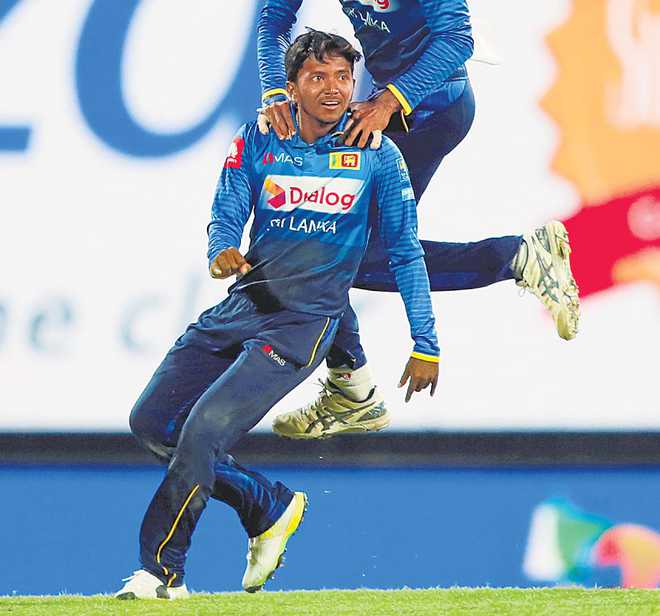 Akila Dananjaya left the Indian batsmen clueless with his googlies and picked up an impressive 6/54. REUTERS

India captain Virat Kohli doffed his cap to Sri Lanka’s Akila Dananjaya after the 23-year-old’s mesmerising spell in the second ODI in Pallekele on Thursday. Barely 24 hours after he had tied the knot, the mystery spinner left the Indians in a tangle, claiming career-best 6/54. His fantastic effort, though, fell short of forcing a series-levelling victory for his team.

India, chasing 231 to go up 2-0 in the series, were cruising at 109 for no loss in the 16th over when Dananjaya struck, dismissing Rohit Sharma for 54. That was just the appetizer, however, as it was in his next over that the spinner injected fresh drama into the game and life into the gloomy stands. Dananjaya slipped in three googlies to dismiss Kedar Jadhav, Kohli and KL Rahul in the space of five balls, bringing his side back into the match. “You have to give credit to a guy who bowled an outstanding spell,” Kohli said afterwards, dismissing suggestions that rejigging the batting order led to their collapse.

“If I had gone at No. 3, I still would have missed the ball, because he was bowling that well in that spell,” the India captain, who batted at No. 5, said. “The batting order did not really matter.”

Dananjaya is another product of Sri Lanka’s seemingly endless reserves of special bowlers, an off-spinner who can also bowl leg-spin, googly, ‘doosra’, and even the carrom ball. His full range of tricks was on exhibition on Thursday against a team traditionally very comfortable against spin. The Indians did not help their cause by staying on the back foot as Dananjaya curled in googlies.

“I realised my off-spin was working better, I kept using all the variations in my first eight-over spell,” Dananjaya said after collecting the Man of the Match trophy.

Kohli said his team now had a better idea about what to expect from the bowler. “We thought he was an off-spinner bowling an odd leg-break, but he picks up four wickets on googlies,” a bemused Kohli said. “It’s difficult when you have not seen the guy at all. He has not played us before. But now we saw how the ball was coming out of his hand,” he added.

The teams meet again on Sunday with India, who whitewashed Sri Lanka in the preceding Test series, hoping to clinch the five-match series with two ODIs to go. — Reuters

100 MS Dhoni and Bhuvneshwar shared an unbroken 100-run stand — India’s highest for the eighth wicket. The previous highest was 84 between Harbhajan Singh and Praveen Kumar vs Australia.

11 Number of century stands Shikhar Dhawan and Rohit Sharma have shared, the joint-third highest by an Indian pair. The top two are, 26 by Sourav Ganguly and Sachin Tendulkar and 13 by Virender Sehwag and Tendulkar.