RANCHI: India closed in on a 3-0 whitewash of South Africa by reducing the visitors to 132 for eight in their second innings at stumps on day three of the third and final Test, here on Monday. 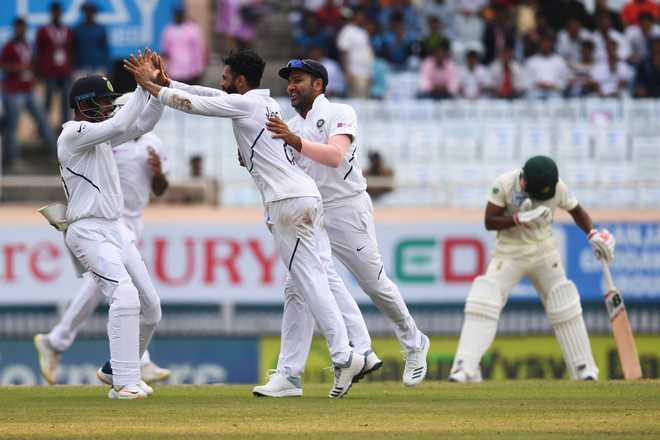 India closed in on a 3-0 whitewash of South Africa by reducing the visitors to 132 for eight in their second innings at stumps on day three of the third and final Test, here on Monday.

Theunis de Bruyn (30) and Anrich Nortje (5) will resume South Africa’s second innings on Tuesday. They are still trailing by 203 runs.

South Africa today lost 16 wickets after resuming the day at nine for two in their first innings.

India had made 497 for nine declared in their first innings after electing to bat.

Umesh Yadav, who set the tone of the day cleaning up South African skipper Faf du Plessis (1) with an unplayable late outswinger, was the pick of the Indian attack as both pacers and spinners once again complemented each other to bring the visitors’ downfall.

Like he did in the first innings, Yadav gave the first breakthrough in South Africa’s second essay when he cleaned up Quinton de Kock (5) with a perfect length delivery that angled across the left-hander.

Then Mohammed Shami ripped through the middle-order first castling Zubayr Hamza (0) with a full length delivery. Shami then dismissed Du Plessis (four) and Temba Bavuma (0) in successive overs to leave them 309 runs in arrears following-on with more than two days left.

An early tea was taken as both the teams were left shaken after opener Dean Elgar was hit on his helmet by a ripping 145kph bouncer from Yadav. The batsman paused for a bit and stood on the ground before leaving the field.

India wrapped up the South African first innings in 56.2 overs after yet another meek batting surrender that lasted less than two sessions after the visitors resumed the day at nine for two in five overs.

Yadav claimed 3/40 in the first innings and was finely supported by Shahbaz Nadeem, Mohammed Shami and Ravindra Jadeja who all returned with two wickets each in the South African first innings.

The local lad, Nadeem, cleaned up the tail trapping Anrich Nortje lbw to make a memorable debut, returning with figures of 11.2-4-22-2.

Nadeem had his “big moment” when he dismissed Temba Bavuma (32) for his first wicket in international cricket. He foxed Bavuma with his flight as the batsman stepped out of the crease, leaving Wriddhiman Saha to do the rest.

Nadeem’s first international wicket incidentally came even before any batsman could score a run against him.

South Africa began the second session staring at an imminent follow-on as they lost their seventh wicket in the fourth ball after the lunch-break when a hapless Dane Piedt was beaten by Shami’s raw pace as it cut back in to trap him in front.

What followed was a body blow in the 39th over where Shami made Nortje hop all over with his sharp incoming bouncers as the tail-ender managed to survive the hostile spell.

There was a brief frustration for the Indians as debutant George Linde resisted the Indian attack with his 37 before Yadav again gave the breakthrough with Rohit Sharma taking a low catch at second slip.

The only high point of the South African batting was Zubayr Hamza as the 24-year-old, who replaced an injured Aiden Markram, showed fine application in his 62 from 79 balls to provide brief resistance in the first session.

Hamza alongside Temba Bavuma (32) gave the Proteas some ray of hope in a 91-run partnership that came after Yadav cleaned up De Plessis on the fifth ball of the day.

Hamza, who struck 10 boundaries, hit seasoned off-spinner Ravichandran Ashwin for a six over mid-on to bring up his maiden fifty in his second Test.

The duo put up a much-needed fight for South Africa before Jadeja provided the breakthrough by dismissing Hamza for 62 with a straighter one that crashed through the gate. — PTI