NEW DELHI: Round 3 of the Champions Yacht Club FMSCI Indian National Rally Championship has been cancelled after an accident involving Gaurav Gill’s car resulted in the death of a family of three. 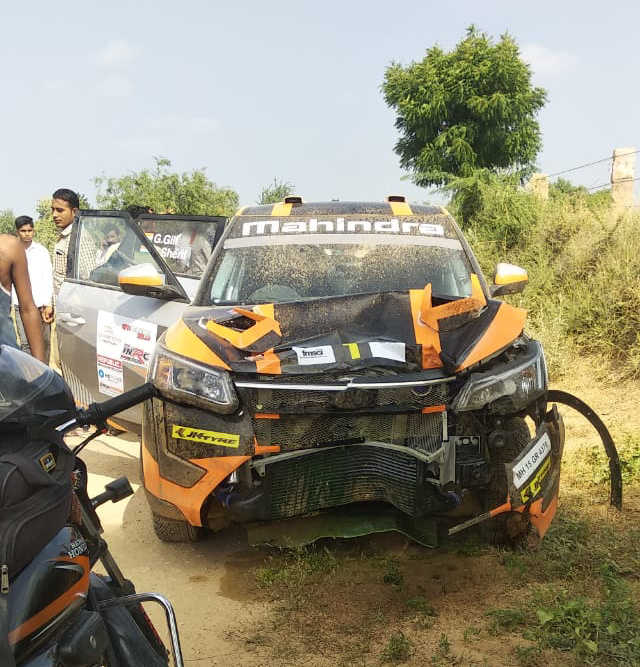 A view of Gaurav Gill''s car after the accident on Saturday. Tribune photo

Round 3 of the Champions Yacht Club FMSCI Indian National Rally Championship has been cancelled after an accident involving Gaurav Gill’s car resulted in the death of a family of three.

The incident happened in the morning near Hotarda village when a bike-bound family of three was hit head on by Gill’s car, which was travelling at a speed of 140 km per hour.

All three died on the spot. An injured Gill and his navigator Musa Sherif were picked up by a trailing car after the crash.

Gill, who became the first from the motorsports fraternity to be conferred with the Arjuna Award, had just returned from an average outing at WRC 2 the Rally of Turkey and was looking for a positive result at the Rally of Jodhpur which is supposed to be one of the fastest in the country.

The officer investigating the case, Chok Singh, told this correspondent that the rally organisers weren’t cooperating with the enquiry. “Nobody is taking my calls. All I know is that the driver involved in the accident is GS Gill,” Singh said.

“I can’t do anything on my own as the FIR is yet to be filed by the deceased’s family members who have kept the bodies out on the road, perhaps seeking adequate compensation”.

Race organiser Arvind Balan wasn’t available for comments. However, Vamcy Merla, who is the director of the Champions Group—the sole promoter of the INRC—said the organisers want to cooperate but are wary to visit the spot of the accident fearing reprisals.

“Angry villagers have seized Gill’s vehicle and have blocked the roads. A few of the journalists have been manhandled and their cameras have been seized. I am also told one of their cars has been seized by the crowd. So I can understand why they are reluctant to go there,” Merla said.

Merla put the blame solely on the deceased. “It is a very sad day for all of us. Three lives have been lost and all down to the sheer ignorance of the man who despite being warned by the marshall chose to risk his life and that of his family,” he said.

“Gaurav got injured too. He and his navigator were picked up by a car. He is in trauma. But I am told he wants to cooperate with the police,” Merla added.

As per Merla, the deceased man got into an argument with the marshall when stopped from taking the rally route. “He abused him and chose to ignore his wife’s pleas too. It all happened within a fraction of second. There was a gap of 15 minutes first car and the zero car. He must have thought no one is coming so he rode on, which resulted in the accident. We immediately cancelled this leg,” Merla said.

Gill’s wasn’t the only car that was involved in crash. Phalguna Urs crashed too after he missed his navigator’s Srikanth Gowda’s call. The crash broke Gowda’s collar bone.

“The organisers had all the permissions needed to run the rally. The police had intimated the villagers to stay away from the roads and also stop their cattle for two days. Permission was taken from the panchayat and track was inspected. We also made an announcement. What else can you do?”