COLOMBO:Left-arm spinner Atharva Ankolekar returned a five-wicket haul to help India clinch the U-19 Asia Cup title with a thrilling five-run win over Bangladesh in a low-scoring final here today. 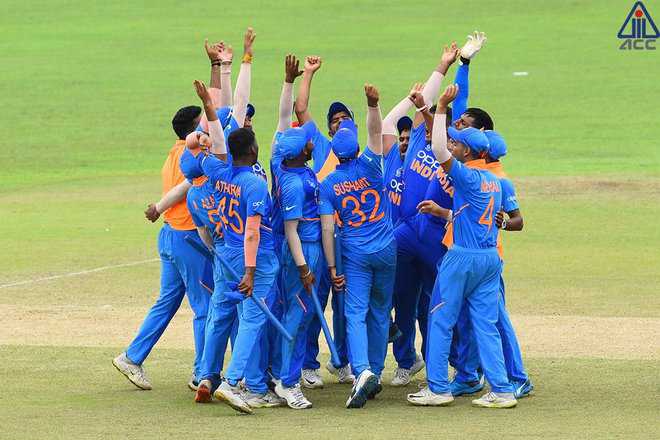 The Indian U-19 team celebrates winning the U-19 Asia Cup final in Colombo. Photo: ACC

Left-arm spinner Atharva Ankolekar returned a five-wicket haul to help India clinch the U-19 Asia Cup title with a thrilling five-run win over Bangladesh in a low-scoring final here today.

Defending a paltry total of 106, India dismissed Bangladesh for 101 in 33 overs. Man of the Match Ankolekar picked up 5/28 from eight  overs.

While Ankolekar spun a web of spin to derail Bangladesh, pacer Akash Singh accounted for three wickets at the R Premadasa Stadium here.

As Bangladesh chased 107 to win the title, skipper Akbar Ali (23) and Mrittunjoy Chowdhury (21) kept them in the hunt. After they were sent  back to the pavilion, Tanzim Hasan Sakib (12) and Rakibul Hasan (11) raised hopes of a Bangladesh win before India bundled them out.

Opener Arjun Azad was the first to go, caught behind by Akbar Ali off Tanzim Hasan Sakib in the third over. In the next over, NT Tilak Varma was removed by Mrittunjoy, while opener SV Parkar was run out by Tanzid Hasan, and India were down to 8/3.

Shashwat Rawat (19) and skipper Jurel then steadied the ship and brought up the team fifty before the former was trapped LBW by Hossain in the 15th over. Two balls later, Varun Lavande (0) was dismissed without scoring, and India were 53/5 in 14.4 overs.

Hossain accounted for Jurel in the next over, reducing India to 62/7. Karan Lal, however, managed to take the score past 100 before being the last man to fall. — PTI

Schemes, which have already been approved in the current fin...