With 4th win in a row, Advani seals 22nd title

MANDALAY (MYANMAR):Pankaj Advani today increased his tally of world titles to 22 by winning a fourth straight final in the 150-up format at the IBSF World Billiards Championship here. The 34-year-old has brought home a world trophy every year since returning from a professional stint in the UK in 2014. 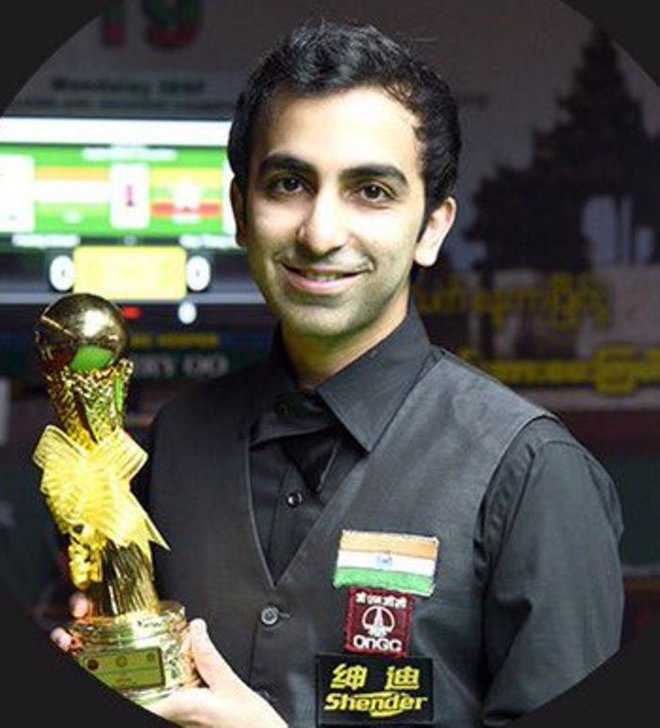 Pankaj Advani poses with the trophy.

Pankaj Advani today increased his tally of world titles to 22 by winning a fourth straight final in the 150-up format at the IBSF World Billiards Championship here. The 34-year-old has brought home a world trophy every year since returning from a professional stint in the UK in 2014.

In the short format of billiards, this is Advani’s fifth title in the last six years.

“It’s such a touch-and-go format and so unpredictable that winning this four years on the trot and five out of the last six is extremely special,” said Advani.

In a repeat of last year’s final, Advani took on local favourite Nay Thway Oo, and the match turned into another one-sided affair as the Indian won by the same scoreline (6-2).

From the word go, Advani was in full flow. He led 3-0 at the halfway mark with the help of fluent breaks (145, 89 and 127). After pulling one back with breaks of 63 and 62, Oo was forced to watch Advani extend the lead. Advani secured the next two frames, taking a 5-1 lead with a 150 unfinished break. He closely lost the next but scored a 74 break before closing out the match.

The Bengaluru-based cueist has won more world titles in his sport than anyone else. “Every time I participate in the World Championship, one thing is clear — my motivation to excel has not diminished,” Advani said. “This win is a testament to the fact that my hunger and fire are both well and truly alive.”

Advani said winning trophies early in his career did wonders for his mindset. “Sport is psychological in nature and it helped that I started winning at an early age, and that instilled tremendous amount of self belief in me and I guess that is the reason why I have been able to win that much,” he said. “I feel the opposition has been great and will be better in the years to come with a lot more younger players coming, so to maintain this position and repeat these feats will be tougher, but then that’s what excites me and that is what the sport is all about,” he added.

Advani has to adjust to snooker in less than 24 hours as he competes in the IBSF World Six-Red Snooker and the World Team Snooker Championships. — PTI