Tanish’s golden formula: 4am practice, no TV, no parties

CHANDIGARH:Years of waking up at 3:30am to prepare their three kids — two daughters and a son — for morning boxing practice finally bore fruit for Patiala-based agriculturist Tejbir Singh Sandhu and his wife Satvinder — their daughter Tanishbir Sandhu became the Asian junior boxing champion in Fujairah, United Arab Emirates. 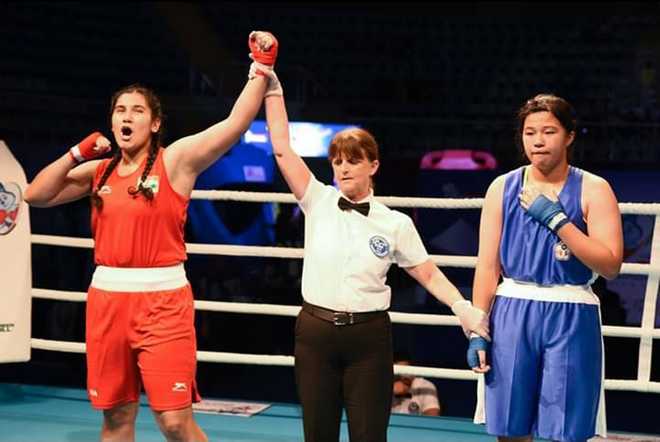 Tanishbir Kaur Sandhu (left) is declared the winner in the 80kg event at the Asian Boxing Championships. BFI

Years of waking up at 3:30am to prepare their three kids — two daughters and a son — for morning boxing practice finally bore fruit for Patiala-based agriculturist Tejbir Singh Sandhu and his wife Satvinder  — their daughter Tanishbir Sandhu became the Asian junior boxing champion in Fujairah, United Arab Emirates.

The 15-year-old Tanish began her career six years ago and became the national champion thrice in her category. Her older sister, Sirjan, is a two-time silver medallist in the National School Games. Their younger brother Udayveer Singh, 14, is also a boxer. Speaking to The Tribune, Tejbir Singh said Tanish has been training at a multipurpose training centre in Patiala, after initial training at the National Institute of Sport, along with her siblings.

Tejbir thanked her coach, Anudeep, and Santosh Dutta, secretary of the Punjab Boxing Association, for their role in the success of Tanish.

“We have been waiting for this day. It has been a daily grind for us all,” said Tejbir. “The day starts at 3:30 am for my wife and I. The kids have to hit the ring for practice at 4pm also. For us the day ends early. We have no idea about TV serials or late-night parties as we go to bed quite early.”

He accepted that boxing is one of the toughest sports, especially for girls, but his daughters were inspired by Mary Kom and want to emulate her feats for the country.

Tejbir said he has been avoiding media exposure for the three children. “I wanted it only when they achieved something at the world level,” he said. “My children have won several trophies in the national circuit, besides other sports tournaments like sports melas too.” Tanishbir, a student of Guru Nanak Foundation Public school in Patiala, is part of the Khelo India project.