LONDON: Rory McIlroy added another award to his trophy cabinet as he was named the PGA Tour Player of the Year today for a third time following a 2018-19 campaign capped by his FedExCup championship triumph. 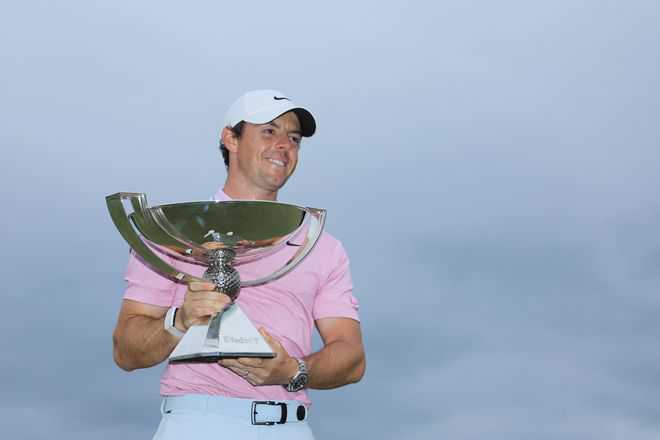 Rory McIlroy added another award to his trophy cabinet as he was named the PGA Tour Player of the Year today for a third time following a 2018-19 campaign capped by his FedExCup championship triumph.

The 30-year-old Northern Irishman beat Brooks Koepka, Matt Kuchar and Xander Schauffele in a vote by players for the Jack Nicklaus Award. McIlroy, who won the award in 2012 and 2014, made 17 of 19 cuts while racking up three victories, including at the season-ending Tour Championship where he also claimed the FedExCup.

The four-time Major champion's other victories came at The Players Championship and RBC Canadian Open, where he set a tournament record and won by seven shots — the largest winning margin of the season.

It is only 16 days since McIlroy was crowned FedEx Cup champion but players are already gearing up for the new US PGA Tour season with the opening event, the Greenbrier Classic, kicking off in West Virginia tomorrow.

With the calendar even more crowded thanks to the golf event at the 2020 Tokyo Olympics, the Classic will be the first of 49 official FedEx Cup events, of which 11 will be played between now and late November as part of the so-called 'wraparound' season.

World No. 10 Bryson DeChambeau heads the field in West Virginia, while the spotlight will also be on 2018 US amateur champion Viktor Hovland as the Norwegian makes his debut as a Tour member after a series of impressive results since turning pro in June.

The event will be followed by four more in the United States before the Tour crosses the Pacific for a three-event Asian swing with tournaments in the South Korea, China and the new Zozo Championship in Japan, which replaces Kuala Lumpur's CIMB Classic on the calendar.

McIlroy and Tiger Woods are among a host of top names already signed up to play in Japan.

The top American and International players will be active until just before Christmas due to the December's 12-15 Presidents Cup at Royal Melbourne in Australia, and after a short break the 2020 campaign will roll on at a relentless pace. From late February through late August there is a top event pretty much every other week, with the July 30-August 2 Olympics golf competition jammed in just two weeks after the British Open, and two weeks before the start of the FedEx Cup playoffs. — Reuters