CHANDIGARH:Punjab’s Kunwer Ajai Raj Singh Rana has qualified for the Youth Olympics after winning the gold medal in the javelin throw event in the Asian area qualification in Bangkok. 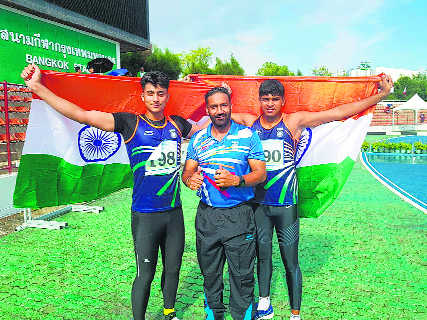 Punjab’s Kunwer Ajai Raj Singh Rana has qualified for the Youth Olympics after winning the gold medal in the javelin throw event in the Asian area qualification in Bangkok.

The 16-year-old — who is a trainee of the Punjab Institute of Sports (PIS) – won with a personal best effort of 76.13 metres. Rana was a cut above the rest, with the silver medallist, from Japan, throwing a best of 72.04m. India had a second medal in the event – Vikas Yadav winning the bronze with a throw of 68.65m.

Rana, who belongs to Kiratpur Sahib, trains under PIS coach Bikramjit Singh in Jalandhar. “He came to me as an 11-year-old and has shown a lot of improvement in the last five years,” said Bikramjit.

Rana’s progress over the last few months has been phenomenal. At the junior (16-20 years) Fed Cup National Championships in April, Rana had won the bronze medal with a best of 68.94m. “Considering he is just 16, this is a huge throw. But to improve your personal best at the  tournament is incredible,” said Bikramjit. — TNS