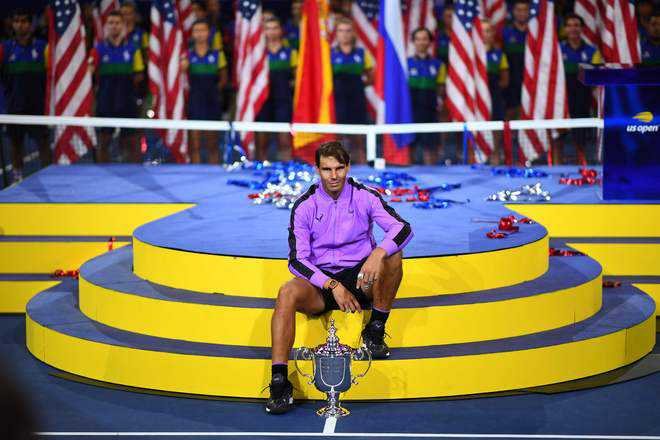 The 33-year-old Spanish left-hander moved one shy of Roger Federer’s all-time men’s record 20 Grand Slam triumphs and became the second-oldest New York champion in the Open era after Ken Rosewall in 1970 at 35 years of age.

“Has been one of the most emotional nights in my tennis career,” Nadal said. World No. 2 Nadal took the top prize of $3.85 million at Arthur Ashe Stadium and added to his US Open trophy haul from 2010, 2013 and 2017. Nadal, who was in his fifth US Open championship match and 27th Grand Slam final, is the first man to claim five Major titles after turning 30. But it took a supreme effort from the Spanish maestro, who nearly became the first player to drop the final after leading by two sets since Ted Schroeder in 1949.

Nadal, who rose to 22-12 in five-set matches, only lost once at a Slam when up two sets, to Italy’s Fabio Fognini in the third round of the 2015 US Open.

On a knife’s edge at 5-5 in the third set, Medvedev reeled off eight of the last nine points to force a fourth, breaking Nadal in the 12th game with a backhand winner. Nadal was broken in the 10th game of the fourth set to force a fifth when Medvedev blasted a sterling backhand return winner. Nadal rescued three Medvedev break chances to hold in the second game of the fifth set, fired a backhand volley winner to break Medvedev in the fifth game and seized a 5-2 edge when Medvedev hit an overhead smash long.

Serving for the match, Nadal was broken when umpire Ali Nili issued Nadal a time violation for his first serve and the Spaniard sent his second long, the crowd booing Nili for his call.

Nadal squandered two break and match points in the ninth game as the drama intensified. Again serving for the match, Nadal rescued a break point then hit a forehand drop volley for his third match point chance and Medvedev sent a forehand return long to end matters. Nadal screamed and fell to the court on his back in joy and exhaustion. — AFP

Djokovic in awe of Rafa

Novak Djokovic took to Twitter to post his congratulatory message for both the men’s singles finalists of US Open 2019. “Congrats to Rafa for creating more history in our sport and showcasing amazing fighting spirit. And congrats to Daniil for an incredible summer on hardcourt in the USA. You should be proud of yourself. Great things to come for you. Well done boys & thank you for a fantastic match,” the 2019 Wimbledon champion wrote.

Australia’s Ash Barty has reclaimed the No. 1 spot in the WTA rankings less than a month after losing it while US Open champion Bianca Andreescu moved up to a career-high fifth after her maiden Grand Slam win in New York. French Open champion Barty exited the US Open in the last-16 but regained the No. 1 spot after last year’s champion Naomi Osaka was also knocked out at the same stage. The Japanese slipped to fourth in the rankings with Czech Republic’s Karolina Pliskova and Ukraine’s Elina Svitolina leapfrogging her to move up to second and third, respectively. In the ATP rankings, there was no change in the top three with Novak Djokovic leading men’s champion Rafa Nadal and Roger Federer but this year’s runner-up Daniil Medvedev moved up to a career-high fourth. — Reuters

4 Hours and 50 minutes, the match finished four minutes short of equalling the longest final in US Open history from Mats Wilander’s 1988 win and Andy Murray’s 2012 title

1 Nadal is one shy of the Open era record of five US Open titles won by Roger Federer, Jimmy Connors and Pete Sampras

20 Nadal, who won his only prior meeting with Medvedev in last month’s Montreal final, stretched his win streak over the Russians to 20 matches since losing to Nikolay Davydenko in the 2011 Doha semifinals

23 Year old Medvedev would have been the youngest men’s Grand Slam champion since Juan Martin del Potro at the 2009 US Open. Medvedev, who will rise to a career-best fourth in the rankings, was a champion at Cincinnati and runner-up at Montreal, Washington and the US Open