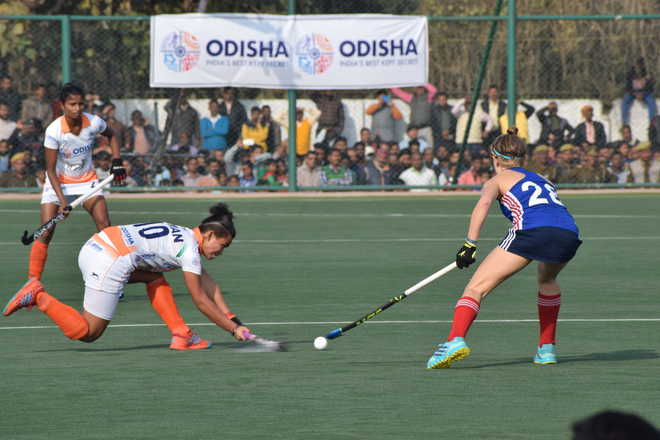 India A leveled the four-match series 1-1 with the 3-2 win in Gorakhpur on Sunday. Hockey India

Railways have now won four titles in five attempts. Last year’s bronze had come after a hat-trick of titles since 2015.

Eager to regain the title, Railways came into the tournament after a long preparatory camp. They overcame teams that were much stronger on paper — Punjab and semifinal opponents Petroleum Sports Promotion Board (PSPB) had a host of current India players.

Both the teams started cautiously as they kept their defence tight and didn’t allow space in their striking circles.

After an uneventful first quarter, the defending champions made the breakthrough in the 23rd minute. Minutes after striker Ramandeep missed a chance, Rupinder converted a penalty corner with a perfect drag-flick.

The third quarter belonged to Harsahib, who turned the tables on Punjab with two crucial field goals. With three minutes to go, Railways got one hand on the trophy as Dilpreet increased the lead to 3-1.

Ramandeep, who had missed several chances throughout the match, finally converted. But it proved too little too late as the final hooter went seconds later.

In Pool A, Karnataka registered their second consecutive win by beating Hockey Coorg 3-0. In Pool B, Madhya Pradesh Hockey Academy secured a 3-1 win over Hockey Bhopal to register their second victory in as many games. Maharashtra secured an emphatic 6-0 win over Central Reserve Police Force (CRPF) in a Pool C game. — Agencies

India A level series with 3-2 victory over France A

Gorakhpur: The India A women’s hockey team came back from a goal down to beat France A 3-2 in the second match of the series here on Sunday. In the first-ever international match played at the Veer Bahadur Singh Sports College here, Mariana Kujur (19th minute), Lalremsiami (30th) and Mumtaz Khan (34th) scored to eke out the win for the hosts after Mickaela Lahlah had given France A the lead in the 14th minute. The visitors showed some resilience in the last quarter and found a second goal through Guusje Van Bolhuis (58th), but the home team held on to register the series-levelling win. India A had lost the first match 1-0. The two teams will play the third match in Lucknow on Tuesday. — PTI