KUALA LUMPUR:Saina Nehwal scripted a hard-fought straight-game win over former world champion Nozomi Okuhara of Japan to enter the women’s singles semifinals but a fighting Kidambi Srikanth crashed out of the $350,000 Malaysia Masters here on Friday. 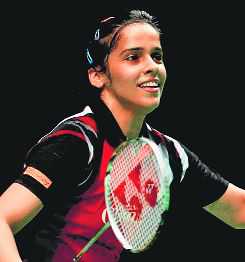 Saina Nehwal scripted a hard-fought straight-game win over former world champion Nozomi Okuhara of Japan to enter the women’s singles semifinals but a fighting Kidambi Srikanth crashed out of the $350,000 Malaysia Masters here on Friday. Seventh-seeded Saina, who had a 8-4 head-to-head record against Okuhara before today, fought back from 9-15 and 14-18 down in the two games to extend her dominance over the second-seeded Japanese with a 21-18 23-21 win in a 48-minute quarterfinal match.

The 28-year-old from Hyderabad, who had won the title in 2017 and was a runners-up in the 2011 edition, will face three-time world champion Carolina Marin of Spain on Saturday. Saina has defeated Marin five times and has lost to the Spaniard as many times in their 10 meetings.

Srikanth, however, squandered a one-game advantage to go down 23-21 16-21 17-21 to fourth seed Korean Son Wan Ho in the men’s singles quarterfinals that lasted 72 minutes. Srikanth recovered from a 4-11 deficit to pocket the first game, but he failed to breach a 4-9 gap in the second game, allowing Son to take the tie into the decider.  The seventh-seeded Indian then wasted a 5-1 advantage in the third game as Son fought back and went on to win the game and the match. — PTI