Such moments are game-changers: Ashwin on ‘Mankading’ Buttler

JAIPUR: Ravichandran Ashwin has no regrets about ‘Mankading’ Jos Buttler in an IPL clash here as he feels batsmen “need to be wary” of leaving the crease early. 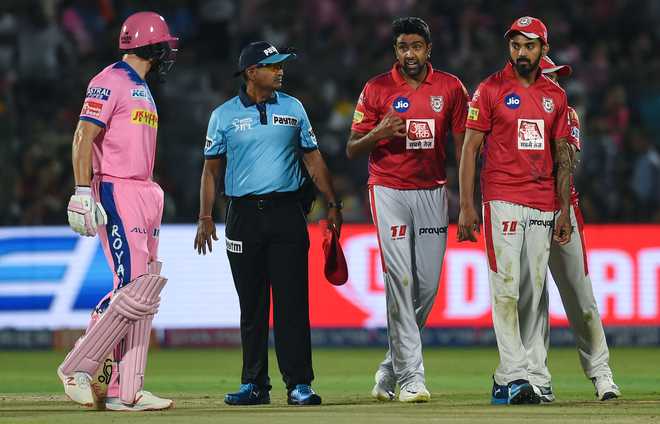 Ravichandran Ashwin has no regrets about ‘Mankading’ Jos Buttler in an IPL clash here as he feels batsmen “need to be wary” of leaving the crease early to avoid game-changing moments like these.

Kings XI skipper Ashwin sparked off a big controversy on Monday when he mankaded Rajasthan Royals’ Buttler, the first to be dismissed in such a manner in the history of the Indian Premier League.

A desperate Ashwin mankaded Buttler in controversial circumstances in the 13th over when the batsman was going strong at 69 off 43 balls.

The dismissal raised fresh debate over the spirit of the game as the off-spinner didn’t give the Englishman a prior warning.

But Ashwin said he was completely within his rights to execute such a dismissal, which completely turned the match in Kings XI’s favour.

The debate continues as some like legendary Sunil Gavaskar find it disgusting that one of India's most iconic cricketer Vinoo Mankad is attached to this controversil dismissal.

Mankad was the first to do it back in 1947 during a tour of Australia. "It was Bill Brown who got out, so why is it called Mankading and not Browned," Gavaskar has time and again stated.

“No real argument on that and it was pretty instinctive,” Ashwin said after Kings XI beat Rajasthan by 14 runs.

“I didn’t even load and he just left the crease. We ended on the right side of the coin, but I definitely think that those are game-changing moments and batsmen need to be wary of it.”

The Kings XI skipper lauded his bowlers for bringing the team back into the contest.

“We all know that after six overs it is going to slow down. Credit to bowlers on how they bowled. I have been working on a lot of variations, pretty happy that it came out,” he said.

“Sam (Curran) had a bad day with the ball, but he came back well. Everybody ticked their boxes. We do have a few options amongst us, but if we can have good five overs, there is nothing like it.”

Rajasthan Royals skipper Ajinkya Rahane refused to comment on the controversial dismissal and left it on the match referee to take a call on the issue.

“We are not supposed to comment on a controversial issue. The match referee will take the call. We will take the decision sportingly,” he said when asked about the dismissal.

Rahane, too, praised the opposition bowlers for restricting Rajasthan, especially after a superb start to the chase.

“I thought we were batting really well. We started off well at the top and then got another good partnership. Later on, we needed 39 off four overs and we thought that could have been done easily,” he said.

“But Kings XI bowled really well in the last three overs. When you are chasing 180 plus, someone has to go really hard.”

Man-of-the-match Chris Gayle, who hit 79 off 47 balls, was happy with his form.

“This is a big ground, to be honest. I have been in good form, so it was good to start on a winning note. Sarfaraz (Khan) got some runs today, which was really good.

“One thing we discussed before the tournament was to win this IPL for the Universe Boss (referring to himself) and the youngsters have got my backing,” he signed off. PTI