JAKARTA:PV Sindhu stormed into the semifinals of the Indonesia Open after beating Japan’s Nozomi Okuhara in straight games in the women’s singles event. 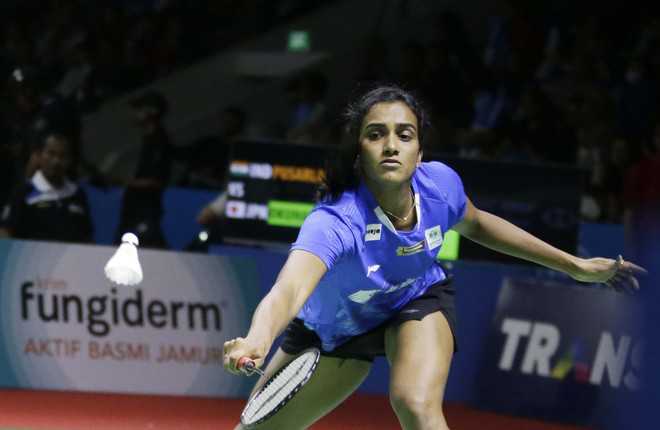 PV Sindhu stormed into the semifinals of the Indonesia Open after beating Japan’s Nozomi Okuhara in straight games in the women’s singles event. Olympics silver medallist Sindhu, seeded fifth, hardly broke a sweat as she posted a comfortable 21-14 21-7 win over the third seeded Japanese shuttler in just 44 minutes.

The Indian will face second seed Chen Yu Fei of China in the last-4 clash of the BWF World Tour Super 1000 tournament. Chen Yu Fei was pushed to a 21-14 17-21 21-16 result by USA’s Beiwen Zhang. Chen said, “Whoever I play next I will do my best to prepare for the contest.”

Top seed Tai Tzu Ying beat Ratchanok Intanon 21-18 16-21 21-12 and Akane Yamaguchi beat Nitchaon Jindapol 21-17 21-14. Sindhu, also a multiple-time World Championship s medallist, dominated the proceedings from the start to finish. She took little time to get into the groove and once she broke away from tied 6-6, there was no looking back for the shuttler from Hyderabad.

Sindhu reeled off four consecutive points to move ahead 10-6 and although Okuhara managed to earn a couple of points, the Indian went into the break at 11-8. After the interval, Sindhu kept widening the gap to take the first game 21-14. The second game turned out to be a one-sided affair as Sindhu ran away with the game with hardly any resistance from the higher seeded opponent. — PTI

Vladivostok: Meghana Jakkampudi progressed to the semifinals of the mixed and the women’s doubles event of the $75,000 Russian Open tournament. Meghana paired up with Dhruv Kapila to beat the Russian combination of Maksim Makalov and Ekaterina Riazantceva 21-3 21-12 in the mixed doubles. The eighth seeded Indian pair set up a clash with Indonesian seventh seeds Adnan Maulana and Mychelle Crhystine Bandaso. Meghana then combined with her women’s doubles partner Poorvisha S Ram to see off another local pair of Viktoriia Kozyreva and Mariia Sukhova 21-19 21-11 to enter the semis. The top seeds will meet fourth seeds Japanese Miki Kashihara and Miyuki Kato. Rituparna Das lost 10-21 21-16 16-21 to top seed Kirsty Gilmour of Scotland, while Siril Verma went down 11-21 27-29 to Ihsan Maulana Mustofa of Indonesia. Sixth seeded Indian mixed doubles pair of Krishna Prasad Garaga and Poorvisha S Ram lost 11-21 14-21 to top seeded Russian pair of Evgenij Dremin and Evgenia Dimova. — PTI

Germany’s Mark Lamsfuss and Marvin Seidel suffered their third straight defeat this year to Mohammad Ahsan and Hendra Setiawan of  Indonesia. The No.4 seeds, Ahsan and Setiawan — called ‘Daddies’ by their fans — closed out the match 21-16 21-17